The 2021-22 men’s college hockey season has begun, and with that, let’s fast forward to the end of the season and project what the bracket could look like for the national tournament.

No chance any of these are wrong, right?

Let’s lay a few ground rules for this. There are 16 teams in the Division I men’s ice hockey bracket. Six enter the big dance by way of winning their conference — Big Ten, Hockey East, NCHC, CCHA, Atlantic Hockey Association and ECAC. The other 10 are at-large bids picked by win-loss record, head-to-head wins, strength of schedule and RPI, among other factors.

I had to consider a few things when making each regional. First, I had to make sure that if a host institution qualified, they are placed in that regional. Then I had to make sure teams from the same conference didn’t play each other in the first round. Finally, at least one or two teams per region had to be within driving distance.

LATEST POWER 10: A new No. 1, Quinnipiac leaps ahead and BU falls off

Was it easy? Absolutely not. There was a lot of mixing and matching but in the end, I got what I project to be the bracket come the end of the season.

Here are my top four seeds:

The fun thing about college hockey is surprise teams go on runs every single year and No. 1 seeds in each regional are far from a guarantee to earn a spot in the Frozen Four. Last year, zero of the No. 1 seeds made it past regionals. In 2019, even though the national championship matchup was between two 1-seeds, the other two were upset in the first round of regionals. But the four teams listed above are the four I project to be the best during the regular season.

Michigan has the most talented roster in college hockey. With offensive headliners like Brendan Brisson, Matty Beniers, Kent Johnson and Thomas Bordeleau, plus Owen Power leading on defense, the Wolverines are an easy choice for the overall No. 1 seed. I expect them to roll through their schedule. The biggest question mark facing their team will be if a young, inexperienced core like this one has what it takes to overcome older, battle-tested teams in the tournament. Remember: Michigan couldn’t play in the tournament last year due to COVID-19 protocols. Yes, that means it’s hungry to get back. But it also denied the players listed above a chance at figuring out what it takes to win at that time of year.

St. Cloud State has the perfect mix of what you want in a team looking to win a national championship. The Huskies were trounced in the final last year, falling to UMass 5-0. They also have fifth-year forward Easton Brodzinski, who broke his femur in the regionals last spring. It was a rallying point for them then and it is again now with Brodzinski already back ahead of schedule and scoring goals. Add in the depth of talent — Veeti Miettinen, Jami Krannila, Nolan Walker and Micah Miller among others — and you have a team built for March and April. It’s also not uncommon for teams to head back to the final round after losing the previous year. UMass just did it.

Like the Huskies, Minnesota State boasts motivation mixed with depth. Its last-minute loss to St. Cloud State in last year’s Frozen Four won’t be fading from its mind anytime soon. Dryden McKay is one of the best goalies in college hockey. He entered this campaign two shutouts away from the all-time shutout record set by Ryan Miller with Michigan State. It took him four games to tie it. It won’t take many more for him to break it. Along with McKay in net, the Mavericks benefit from a lot of returners such as Nathan Smith, Ryan Sandelin and Reggie Lutz.

ICE BREAKER TOURNAMENT: Follow along as four of the best teams in the nation play each other this weekend

Finally, there’s Minnesota. The Golden Gophers will be neck-and-neck with Michigan all season long for the Big Ten title, as the teams play each other four times. My prediction is the Wolverines win in the regular season battle, but the Gophers have more of what it takes to win during this time of year. For starters, they have Jack LaFontaine in net. He won the Mike Richter award for best goaltender in college hockey last season. In front of LaFontaine is an older core of forwards in Ben Meyers, Sammy Walker and Blake McLaughlin and defenseman Jackson LaCombe. All four put up over 20 points last season. 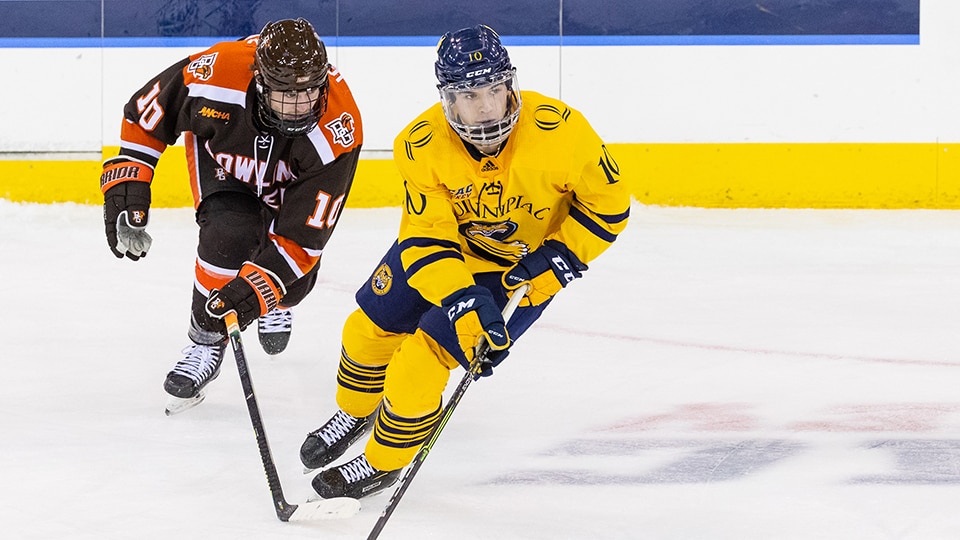 Now, let’s break the bracket down by regional.

Western Michigan is one of my sleeper picks for this year’s bracket. It returns all 10 of its top scorers from last year and plays in the heavyweight NCHC conference. The Broncos have been known to play spoiler in recent years within the NCHC and now with an older, more experienced team, an upset of No. 1 Michigan wouldn’t be out of the realm of possibility.

STAYING IN SCHOOL: How Owen Power decided to stay at Michigan instead of going to the NHL

North Dakota and Boston University would be a great matchup. The Fighting Hawks will work all year to replace their top three scorers who departed over the offseason. BU has some really exciting young talent such as freshman defenseman Ty Gallagher and freshman forward Tyler Boucher. How those rookies mesh with veterans like senior forward Logan Cockerill and junior forward Robert Mastrosimone will dictate where the Terriers go this year.

St. Cloud State is the easy favorite in this grouping — the depth, experience and motivation on that roster has the Huskies primed to go deep. But Harvard won’t be an easy out. Even though the Crimson didn’t play last season due to COVID-19, they have a total of 11 NHL draft picks on the roster and snagged one of the best recruiting classes in the country heading into this season.

Quinnipiac is going to be a force in college hockey this year. The Bobcats already have some really good returning players such as senior forward Ethan de Jong and senior defenseman Zach Metsa. They added five really good transfers, one being Oliver Chau who just won a national championship with UMass. That experience will be vital come the spring. Providence won’t be the most notable team in Hockey East, but the Friars will stay in the top tier all year, securing a spot in the big dance. 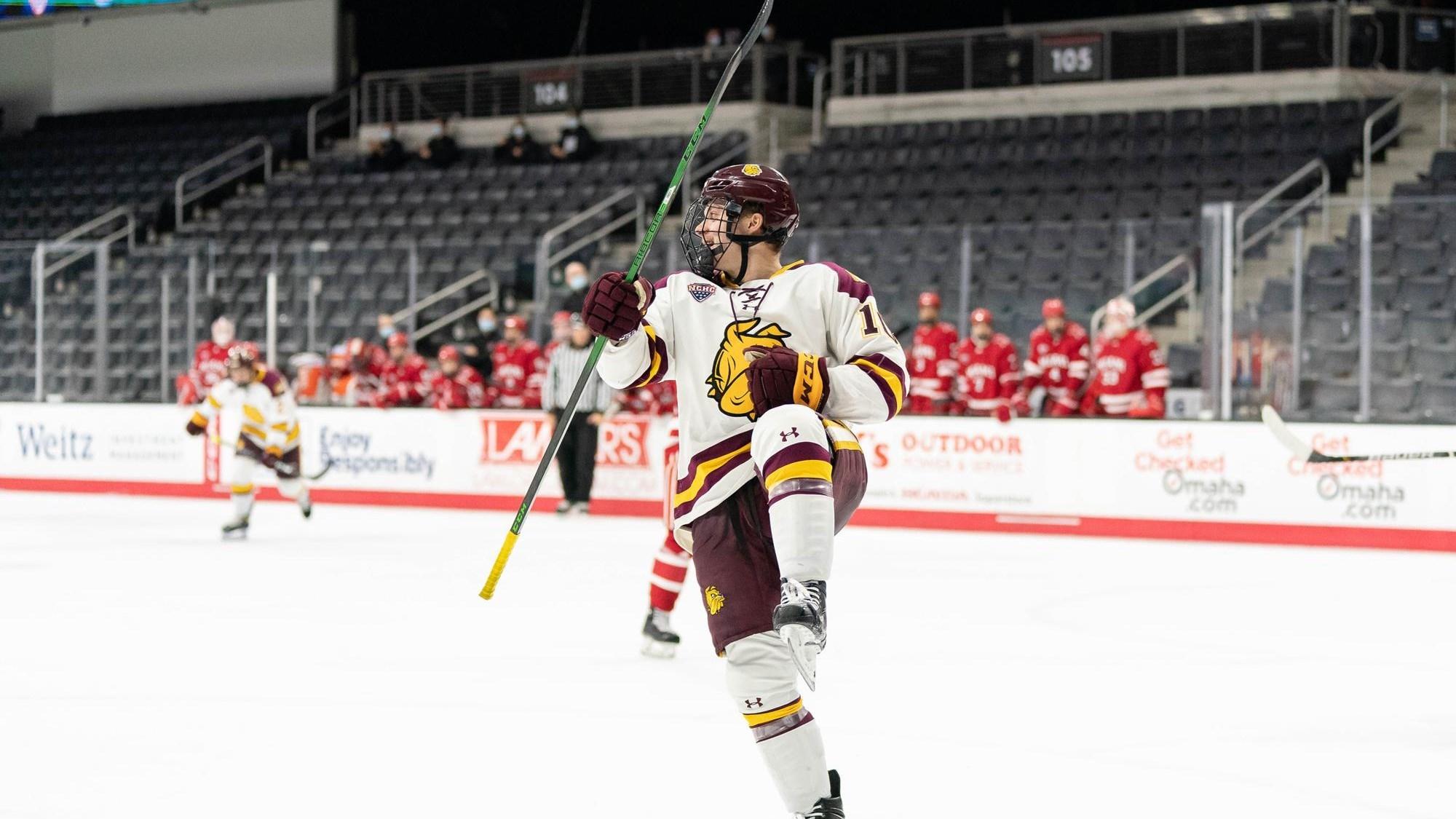 This is the toughest regional of the four with three really good teams in Minnesota State, Minnesota Duluth and Boston College. BC and Minnesota Duluth would be a wild one in the first round. The Bulldogs got all the way to the Frozen Four last year, while BC lost in the regional final. At first glance, however, it’s hard not to give the edge to Minnesota Duluth here.

PLAYERS TO WATCH: Here are 7 players to keep an eye on this college hockey season

While AIC didn’t stand a chance against No. 1 North Dakota this past spring, the Yellow Jackets did upset No. 1 St. Cloud State in 2019. Dryden McKay in net will spell trouble for opponents this time of year.

While it’s unfortunate for the reigning national champions that they’ll have to go all the way to Colorado to play their regionals, it’ll be worth it for the Minutemen to have a 2019 Frozen Four rematch with Denver. With Denver as the host for this regional, this game against UMass would be as crazy an atmosphere as one could imagine for a tournament duel. 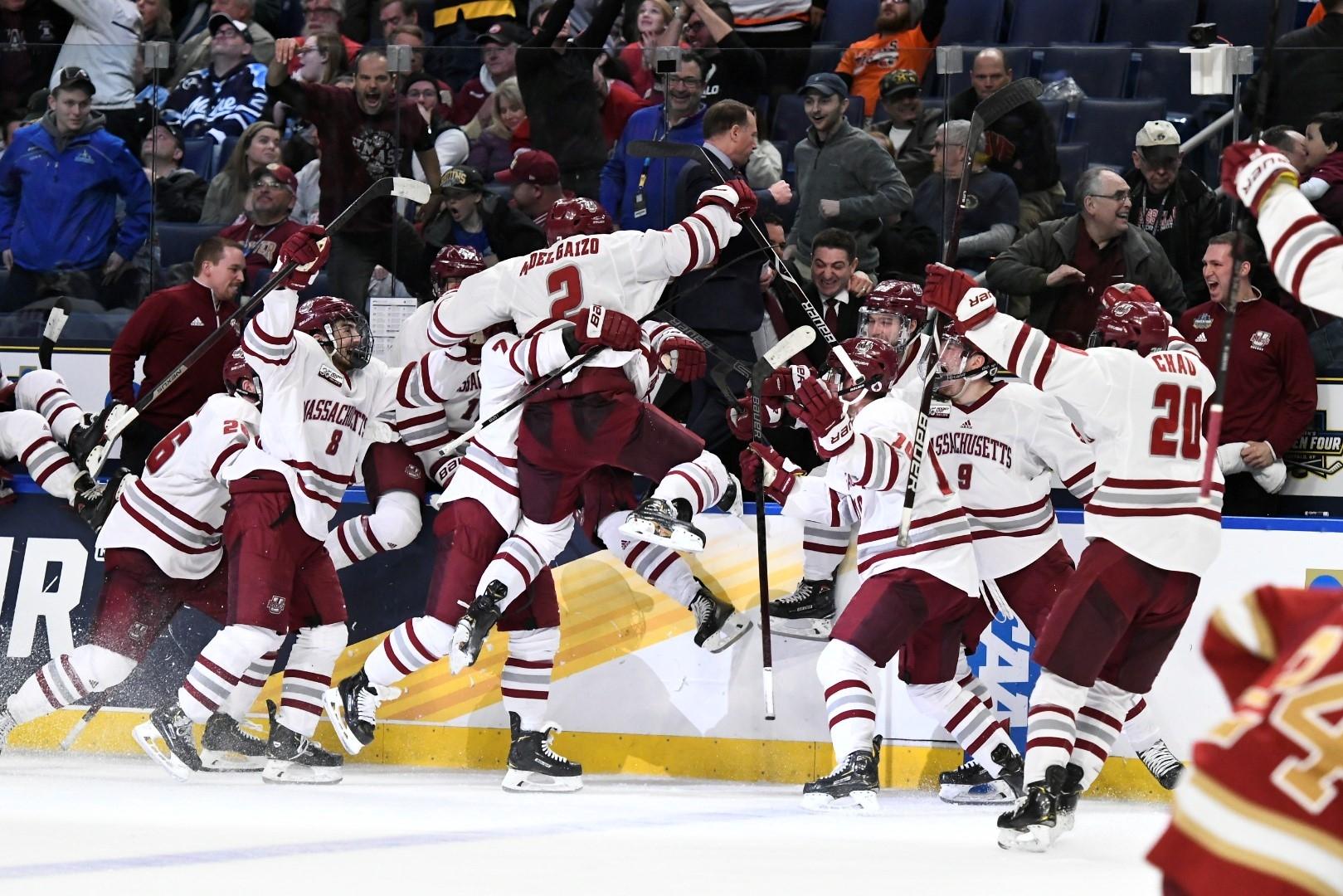 Arizona State was my fun, underdog pick in this bracket. It’s the final season at Oceanside Arena for the Sun Devils, and they have 20 games there this season. They’re really good at home, so expect some big wins there. They also have an underrated lineup, headlined by fifth-year forward Johnny Walker, who’s one of four fifth-years on the squad. They also added three grad transfers, making this a veteran-heavy team. Freshman forward Josh Doan and freshman defender Ty Murchison will help in their quest for a tournament berth, too.

Does Arizona State upset Minnesota? It’s hard to tell and it’s even harder to actually imagine it happening. But we do know that the Sun Devils will at least make it interesting.

How Will the Canadiens Fare Without Price, Weber?

5 takeaways from a wild October in...

5 biggest storylines to watch in the...