Well, that was quite the weekend of college hockey.

Friday, Saturday and Sunday had a smorgasbord of results. This year’s regionals — the first since 2019 — had blowouts, comebacks and upsets. All four of the regional No. 1 seeds will watch the Frozen Four from home. There was even a 5OT marathon tossed in.

With 10 games over three days, there was a lot to take away from an action-packed slate of games. Let’s dive in.

Watch the game-winner that ended a record 5OT marathon (!)

How could we not start with the instant classic — the longest tournament game in DI history — that was Minnesota-Duluth’s 5OT win over North Dakota?

When Bulldogs freshman Luke Mylymok potted the winner to end the 142-minute, 13-second affair, it provided a sense of euphoria for Minnesota-Duluth that only earning a trip to the Frozen Four after playing over two full games in just a matter of hours could do.

That made it all the more disappointing for the Fighting Hawks, who also endured Saturday night’s marathon but didn’t leave with the same reward. Add in that North Dakota was the tournament’s No. 1 seed and looked primed for a National Championship, and it’s a heartbreaker few teams ever have to endure.

“We pretty much played two games in one night,” North Dakota senior captain Jordan Kawaguchi said after the loss. “Emotions are all over the place. I really can’t put a lot into words right now.”

The Fighting Hawks entered the final two minutes of the third period down, 2-0, but clawed back with goals from Collin Adams and Kawaguchi to tie the game and force overtime. In overtime, Kobe Roth looked to have won it for Minnesota-Duluth, but the goal was called back for offsides.

Talk about a rollercoaster-ride of emotions for a team many had penciled in as the eventual national champion.

Also, what a moment it was when Bulldogs goalie Ryan Fanti went over to North Dakota goalie Adam Scheel after the OT-winner. That’s the ultimate sign of respect.

Scheel finished the marathon with 51 saves. Zach Stejskal, who Fanti replaced in the fourth overtime, had 57.

2. The way the Chau-Gaudet-Gicewicz line carried UMass through regional wins

Oliver Chau, Jake Gaudet and Carson Gicewicz have been an important forward trio for UMass all season. Gicewicz led the Minutemen in goals with 17. His point total of 24 ranked third on the team. Chau’s 25 ranked second. Senior captain Gaudet’s face-off mastery and puck protection skills allowed his linemates those opportunities.

That was all on display in UMass’ two big, regional wins over Lake Superior State and Bemidji State to propel the program to its second straight Frozen Four.

Against the Lakers, Gaudet had two lamplighters, both of which came from creating his own space at the opposition’s net front. The next night, it was Gicewicz potting his first collegiate hat trick.

Of the nine goals UMass put up over the two games, that line was involved in seven of them: Gicewicz had four, Gaudet had two and Chau had one.

BRACKET SZN: Take a look at how the 2021 men’s ice hockey tournament is shaping out so far

“They were the difference,” UMass head coach Greg Carvel said after the weekend. “They scored all the goals.”

Chau and Gaudet are both seniors and both endured the national championship loss in 2019. Gicewicz is a graduate transfer from St. Lawrence.

“You have to have senior leadership leading the way this time of year,” Carvel said after the win over Bemidji State. “Your best players and your oldest players.”

UMass is sure to make some serious noise in the Frozen Four if that line continues at its current pace.

As St. Cloud State leader and forward Easton Brodzinski lay on the ice after taking an open-ice hit from Eagles forward Trevor Kuntar, the Huskies were down 1-0. No. 1 Boston College had its opponent right where it wanted it.

There was just one problem: The injury to Brodzinski lit a fire under St. Cloud State.

“I think it was a little bit of the guys wanted to play for Easton,” St. Cloud state head coach Brett Larson said after the 4-1 win Sunday. “He’s a guy that’s been here for four years, been a huge part of this program.

“I sensed on the bench and I could hear the boys saying, ‘let’s play for Easton.'”

That was clear Sunday afternoon, as the Huskies had no issue finishing every check on any Eagle who controlled the puck. After the hit, they rattled off three goals in the second period alone. They tacked on an empty-netter for good measure at the end of the third.

“It’s tough losing [Brodzinski],” St. Cloud State senior Luke Jaycox said after Sunday’s game. “He’s a big part of our team. He’s one of our brothers. It sucked, but we still had a goal to achieve and it pushed us a little bit harder to not only work for the team, but for [Brodzinski] too.”

Don’t expect that motivation to go away for the Huskies any time soon.

4. Bemidji State had the upset of the weekend 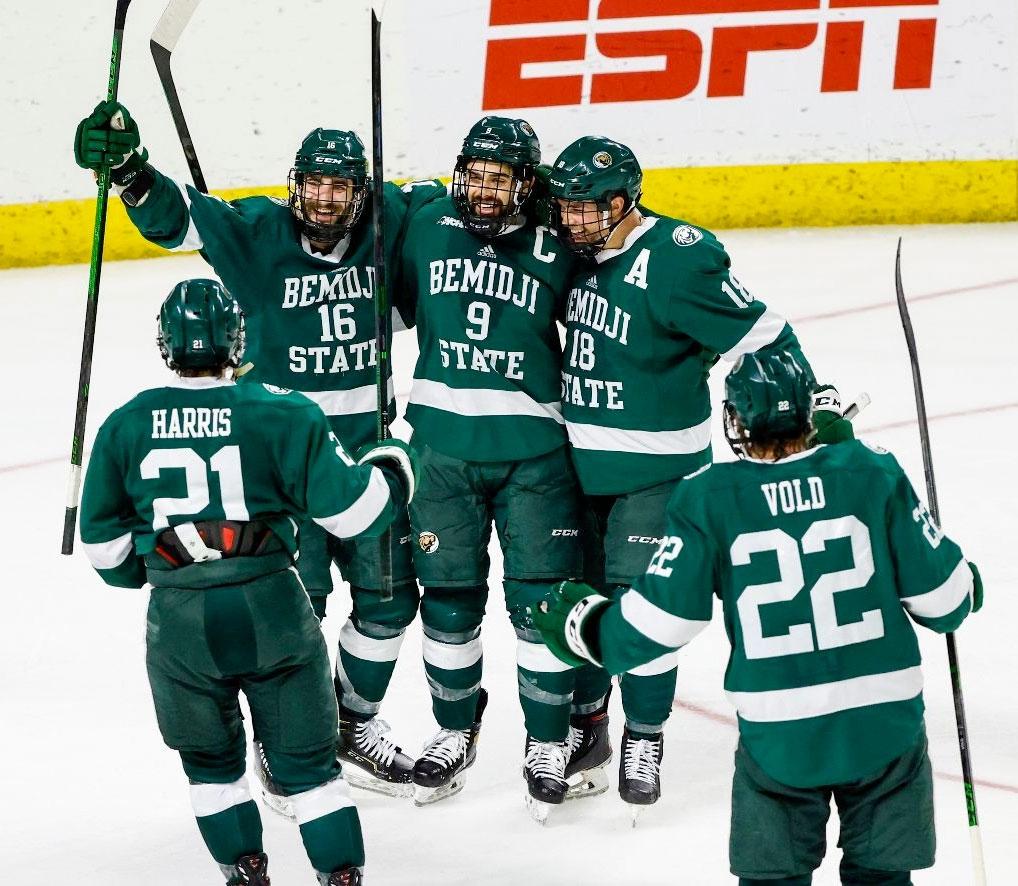 This game set the tone for a crazy three days of hockey.

In the first matchup of the regionals, Bemidji State crushed Wisconsin, a one-seed, 6-3. Six minutes into the third period, the Beavers led 5-1. It was all Bemidji State for the majority of the 60 minutes.

“There were a lot of issues. They outworked us, they out battled us and a couple tough bounces in the first period got us behind,””Badgers captain Ty Emberson said. “It was a goal of our team to get back to the tournament. It was a special group and it ended way too soon.”

While Wisconsin looked really good throughout the regular season, the Beavers stymied the Badgers’ trips through the neutral zone. In the defensive zone, Bemidji State kept most Wisconsin shots to the perimeter.

The lone bright spot was Cole Caufield, who put up a whopping 13 — yes, thirteen — shots on Beavers goalie Zach Driscoll. Two of those ended up going in midway through the third period.

The Beavers were eliminated by UMass the following night, but the damage was already done: They upset a No. 1 seed and a crew that looked prime for a deep run.

5. BU fell victim to a crazy goal in a season-ending loss

Harry Houdini couldn’t have scripted a magic trick quite like St. Cloud State’s first goal against BU. Watch the clip below and wonder how the puck went from behind the net to St. Cloud State forward Micah Miller’s stick.

But it somehow did and Miller capitalized on the unknown. From that point forward, the Huskies outscored the Terriers 6-1.

St. Cloud State with an absolutely WILD goal against BU.

After the game, all BU could do was shrug its shoulders. Bad puck luck struck at a bad time.

“I don’t have a clue how the puck went that high up in the air and landed right on the guy’s stick,” BU forward Logan Cockerill said after the loss. “I was on the bench, so I just saw the puck land on his stick and everybody was still in the corner looking at it.”

“Their first goal was one for the ages,” he said.

It’s one the game of hockey may never seen duplicated again.

6. Minnesota State has that team-of-destiny feel

Midway through the third period of Minnesota State’s first-round date with Quinnipiac, the Mavericks trailed 3-1. They were down and out. The Bobcats, a team who was only in the NCAA tournament because St. Lawrence bowed out due to COVID-19 protocols, weren’t giving Minnesota State any room in the offensive zone. It looked like it’d be another year with no tournament win for the Mavericks.

And then with roughly six minutes to play in the final 20, Nathan Smith got one past Bobcats goalie and Hobey Baker finalist Keith Petruzzelli to cut the lead to 3-2. Cade Borchardt tied the game after tipping one in with just over a minute remaining in regulation.

HOBEY BAKER FINALISTS: Take a look at the 10 nominees for this year’s Hobey Baker Award

Then Ryan Sandelin won it overtime. And just like that the Mavericks had their first ever NCAA tournament victory.

Minnesota State steamrolled No. 1 Minnesota, 4-0, the next night.

And here they are going to the Frozen Four.

This team has all the ingredients to win a National Championship. They have Hobey Baker finalist Dryden McKay playing lights-out hockey in net. In the year they get their first win, they’re in the Frozen Four. They have forward Ryan Sandelin who passed on playing for his father, Scott, at Minnesota Duluth, to play at Minnesota State.

How fitting would it be for father and son to stand on opposing benches in the national championship?

There’s just something about this Minnesota State team.

Back pocket goaltenders for the Leafs and is this the calm before the storm?

The path to the DI men’s ice hockey...