In the season opener for both teams, the Boston Pride escaped New Jersey with a 4-2 win over the Metropolitan Riveters. Leading the charge with two goals for Boston was – surprise, surprise – captain Jillian Dempsey, who just happens to be the league’s all-time leader in goals (31 and counting).

“Whenever we play the Riveters we know it’s going to be a grind; we know that they battle, they work hard,” said Dempsey following the game. “They’re tough to play against along the boards, in front of the net. We knew it was going to be a tough game.”

The game was tight for the first two periods and Dempsey and Riveters rookie Kendall Cornine traded goals at even strength. Dempsey’s came with 54.9 seconds left in the first period after she was robbed by goaltender Sam Walther on a similar shot a few minutes prior. “I’ve been practicing that, coming down on the left (side) pretty much all summer,” said Dempsey, while unable to contain a grin. “It always feels good when something you’ve been practicing repeatedly works out. It feels good for it to pay off.”

Cornine netted her first NWHL goal within the first five minutes of the second period and was assisted by her linemates – and former collegiate teammates – Brooke Baker and Mallory Rushton. The game would remain tied at one until the third period when the penalties started to pile up.

Defender Colleen Murphy netted her first goal as a Riveter with a point shot blast that found it’s way past Pride goaltender Lovisa Selander. The goal came on a power play after generating momentum on a 5-on-3 that had just expired. 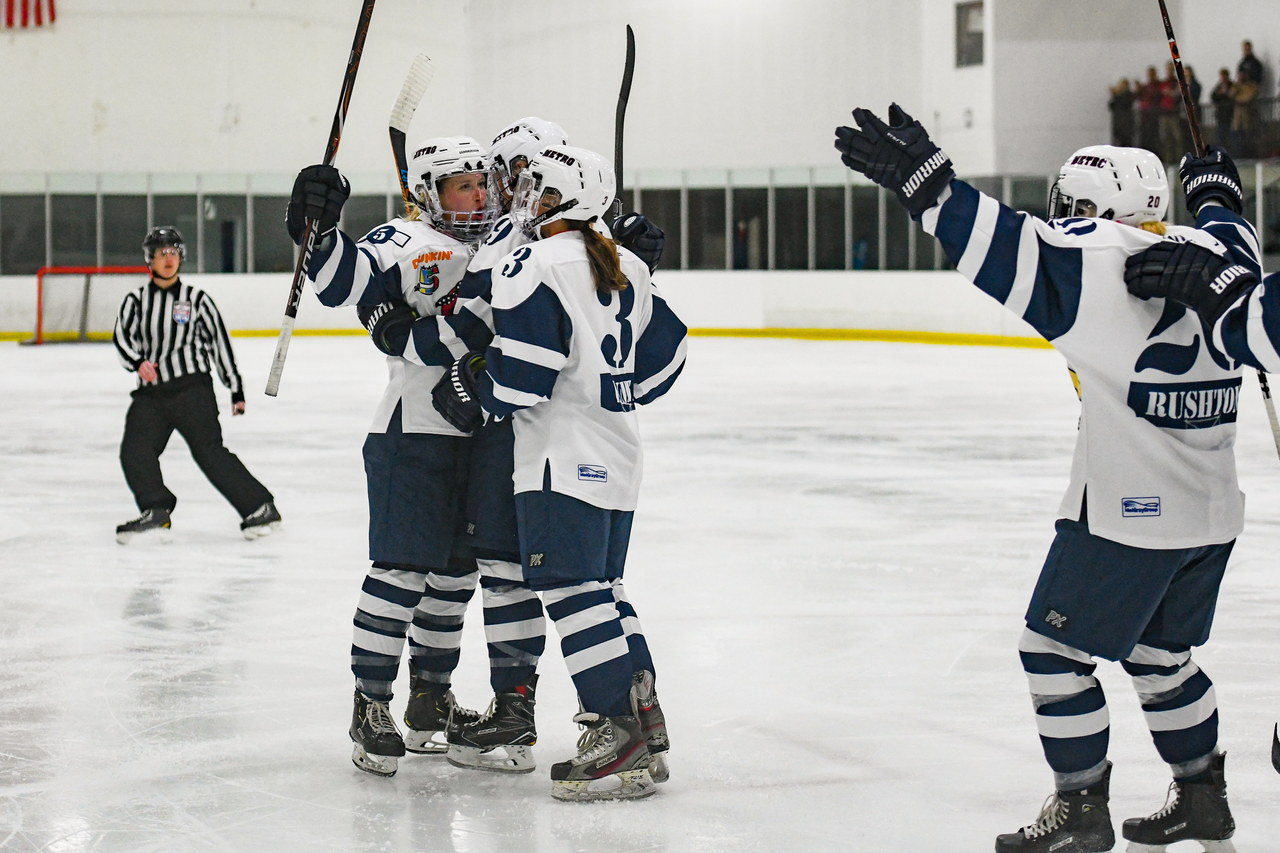 The Pride squandered a chance to tie the game after Walther and the Rivs penalty killers denied them on a 5-on-3 for a full two minutes. “It’s tough to have a 5-on-3 and come away with nothing,” said Dempsey. But something clicked shortly after and Boston scored twice in a span of 13 seconds, completely turning the game on its head.

First Dempsey tied the game, then rookie Tori Sullivan netted her NWHL first goal which became the eventual game-winning goal. “We took a while to get going,” Dempsey added with a smile, “and we still have a long way to go. But we’re glad we toughed it out and got the W.”

The Riveters were unable to convert on a late period 5-on-3 (for 1:47) of their own and McKenna Brand sealed the deal for Boston with a late empty-net goal. “My message to the team after the game was we have to be more consistent,” said Riveters head coach Ivo Mocek, who made his debut behind the bench. “I think we had a great start to the second period. We scored that goal and the first ten minutes we were the better team. We’re a young team and over time we’ll get better, but we did a tremendous job killing penalties today.”

Walther ended up as the hard-luck loser in the game after a phenomenal 36-save performance in her first game as a Riveter. “I feel good,” said the netminder after playing a full game for the first time since college. “I was excited to play an entire game and I was a little nervous, as one could expect.”

“There’s obviously a couple of shots I would like to have back but I think for our first game we started to put things together pretty well and I’m excited going forward with this group.”

Game Notes: The Riveters played the game with five defenders, but help is on the way as coach Mocek says that Kate Leary will be joining the team this upcoming week and Kiira Dosdall will join them the following week. Both teams had six power-play opportunities, the Riveters killed off all six and the Pride went 5-for-6 on the PK. Brand led all players with six shots on goal and Mallory Souliotis was the only Pride player without a shot. Cornine and Madison Packer led the Rivs with five shots apiece. Rushton assisted on both Riveters goals.

Riveters and Whitecaps Ready for Rematch

Hertl scores 2 to lead Sharks past...