For Souliotis and Pride, Prep for Home-Opening Weekend Begins Today

The Boston Pride may have won a tough season opener on the road Saturday against a gritty Riveters squad, but the focus has immediately turned to Boston’s home-opening games against Buffalo this Saturday and Sunday. [TICKETS]

Moments after the win in New Jersey, Boston head coach Paul Mara told the Pride in the locker room that Monday night’s practice would be the time to make immediate corrections in order to beat the Beauts. “We got the two points today against a team that battled hard, and two points on the road is always a good thing,” Mara told the team. “But we can be better, and we will put in the work to get better.”

The message resonated with Pride defender Mallory Souliotis, who takes her craft very seriously as a key member of Boston’s NWHL team, and as a coach and mentor to young players.

“Coach Mara always emphasizes getting better, focusing on the next game,” said Souliotis, who is in her second full season with the club. “We will review anything from the Riveters’ game that we found we could do better and make sure we are all on the same page before these home games against Buffalo.”

Souliotis, who was selected eighth overall by Boston in the 2017 NWHL Draft while playing at Yale, says every Pride practice is a combination of chalk talk, fundamentals, conditioning, and joy.

“During the week before games we focus a lot on special teams,” she said. “The coaches emphasize the importance of special teams, so we work on those at almost every practice. We also love our mini-games. We love competing against one another – battling hard, pushing each other, and having a bit of fun.”

But it’s clear the Pride are in serious pursuit of the Isobel Cup. After winning the first Cup in 2016, they haven’t been to the Final since the NWHL’s second season, and as far as Souliotis is concerned, that’s way too long. Each of their last two seasons ended with a semifinal loss to the Beauts.

“The overall goal is to bring Isobel back to Boston, but there are a lot of games this year and I’m pretty excited that the NWHL increased the amount of games from 16 to 24,” said the 22-year-old Souliotis. “That’s more chances to work towards that goal of being a championship team.”

The Yale grad is one of seven returning players that played for the Pride last season and whether or not that gives them a slight advantage over some of the other teams early on remains to be seen. “Our team will have some chemistry, but it’s not something you can bank on or assume that another team might not have that,” she said, sounding like a wise and savvy veteran. “Minnesota has a lot of returning players, as well as a lot of girls who played at the University of Minnesota. All five teams in the NWHL have a lot of great players. Even though I’m not sure what to expect I do know that we’re going to work hard and do everything we can to win Isobel.” 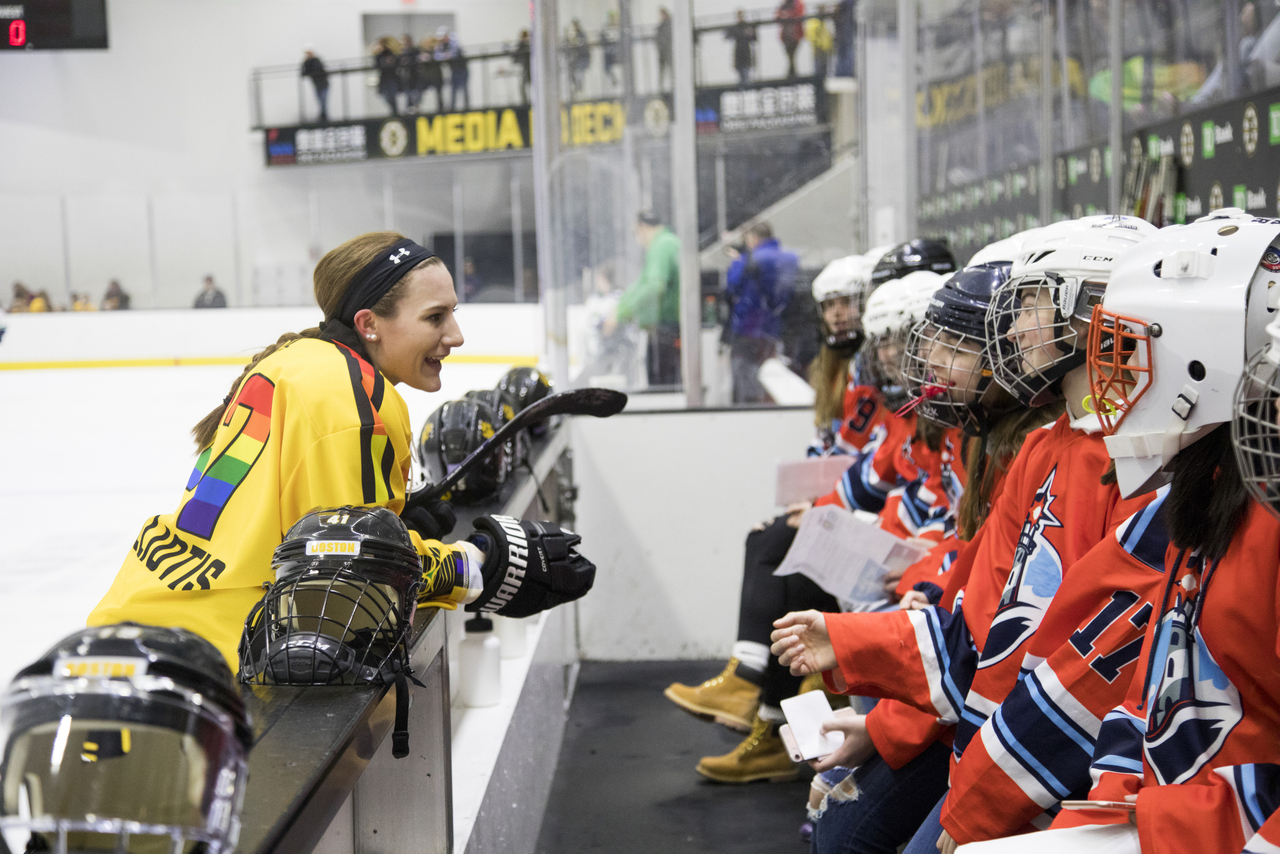 The Acton, Massachusetts native kept busy this offseason in a variety of ways.

“I worked out a lot off-ice, building my strength and continuing to improve my quickness and agility to help me with my foot speed,” said Souliotis. “When I work out off the ice I like to do a lot of lateral work because that really mimics your stride, so I do a lot of one-leg workouts. One-leg squats, working on my explosiveness, stuff like that is really beneficial.”

Besides the Cup, there’s another goal that might be considered 1-B. “Scoring my first pro goal was a really fantastic moment for me, but I was also sad because none of my family was there,” she revealed. “They’ve actually never seen me score in the NWHL because I’ve only scored at away games! That’s something I’m working on this year.”

How has playing in the NWHL and with the Pride changed your game since Yale?

“I have definitely become a better player since joining the NWHL. The pace is a bit faster and girls are stronger, so it has forced me to step up my game and play quicker. The game is also a bit more physical than in college, so adapting to that was tough at first, but I have learned to use my body more effectively. Especially since I am on the smaller side for a defenseman, it’s that much more important to play big and fast.”

It’s only recently since Miles Arnone purchased the Pride, but have you seen any changes around the club yet?
“Absolutely! Miles and his team have been great. Miles has been open to our suggestions and helping us get what we need. He’s been very communicative with our staff and helping us pick up some extra ice time, as well as working on some arrangements for our trips to Buffalo. We discussed partnering with some gyms and a recovery studio to help our overall performance. There are a lot of ideas on the table, and I think Miles and [Pride President] Hayley Moore are working on getting that organized for us.”

Now that the home opener is near, is the anticipation level high?
“I am so excited for our home opener back at Warrior. The fans have always been great and I can’t wait to see the energy they bring this season. Since I grew up in Boston, I know a lot of family, friends and even some of my co-workers (who have recently started following the Pride) will be there, so I am sure it will be an awesome atmosphere. All the fans are in for a real treat this season and I cannot wait to see everybody there this Saturday and Sunday!”

The Pride have sold out every home game in 2019 and they’ll look to continue that trend when they host Buffalo for a weekend series on Oct. 12 and 13 at Warrior Ice Arena. Tickets are available now at www.NWHL.zone/tickets.

5 Things to watch for against St. Louis – TheLeafsNation