Minnesota Whitecaps goaltender Amanda Leveille is entering her fourth season as an NWHL player. In her first three seasons, her team made the Isobel Cup Final each time. Coincidence? We think not. Leveille is a winner and a perennial MVP and Goaltender of the Year candidate. But this is nothing new as Leveille was a three-time NCAA champion during her four seasons at the University of Minnesota.

Although she didn’t play in the Final during her rookie season with the Buffalo Beauts (Brianne McLaughlin did okay with 61 saves to clinch the title), the past two seasons, Leveille has allowed a grand total of two goals and has a 1-1 record in the Isobel Cup Finals. This season she and her Minnesota Whitecaps teammates will attempt to become the league’s first back-to-back champions. It begins this weekend with games on Saturday and Sunday at TRIA Rink in Saint Paul. (TICKETS)

So, how has the league’s premier netminder been preparing for her second season with the Whitecaps?

“Nothing different for me, I prepare for every season the same way,” said the 25-year-old Leveille, the league’s all-time winningest goalie (27 wins). “I also do a lot of stuff on the ice with goalie coaches all around Minnesota. I truly appreciate all of the people I have around me who have so much for me to help me prepare for this season.”

Like most hockey players, Leveille doesn’t do much on the ice once the offseason starts, just off-ice drills, but as the season grows closers she is on the ice more frequently.

“I might be a little bit different from some goalies in this but I take at least a month, maybe almost two months off the ice,” said Leveille. “Just so I can recharge and focus a lot of my attention off the ice. Toward the end of the summer that’s when I really ramp back up to going on the ice and working on my conditioning that way.”

“As far as drills go, anything on the ice I love to do, but off the ice that’s a little bit of a different story there,” said Leveille. “Any time I can get on the ice and just work on specific goaltender techniques — really boring stuff for shooters — but really important stuff for a goaltender. Just tracking pucks. Not that much movement, just making sure that my eyes are going. That’s my favorite thing to do.”

As she gets ready to hit the ice at TRIA Rink for the NWHL’s fifth season, there are a lot of things that Leveille is looking forward to. “First of all, just getting to play another year,” she replied. “We had a lot of signings towards the end of the summer and a lot of them have been former Gophers. I am so excited that I get to be reunited with them on the ice.

“Kelsey Cline was such great teammate during my years with the Gophers and last year I had the pleasure of being a coach with her at one of the high school teams that she coaches in Minnesota. I’m just so excited to be teammates with her again and the same can be said for Syd Baldwin and the other former Gophers and a lot of our players that are returning to the Whitecaps. I’m so excited to get on the ice with those girls again to play this year and compete.”

This season Leveille will be gunning for her third NWHL title which would tie her collegiate accomplishments with the Gophers.

“That would be phenomenal,” she said. “And that’s the goal for our team. We’re not exactly looking ahead to the final game right now. We know that there is a lot of preparation that goes into being prepared to play in this league. Hopefully, we can win another Cup at home…preferably! That was such a cool environment to be able to do it in front of our home fans. We know it’s a long season and we can’t get too far ahead of ourselves.”

Lev, can you provide some insight into how the Whitecaps’ coaching staff gets the team ready for games, like this weekend’s matchups against the Riveters?

Our coaches do so much work behind the scenes – from watching video of our previous game to scouting our opponents to ensure we are set up to have a successful weekend. Our practices are always fast-paced, game-like and have drills that replicate some of our opponent’s tendencies. Our captains do a great job of making sure everyone is pushing each other to be the best they can be in a healthy, competitive way. Our goalie coaches ensure the goalies are confident and ready heading in to each weekend. The goalie coaches also review video and help us to feel confident and ready for the weekend. 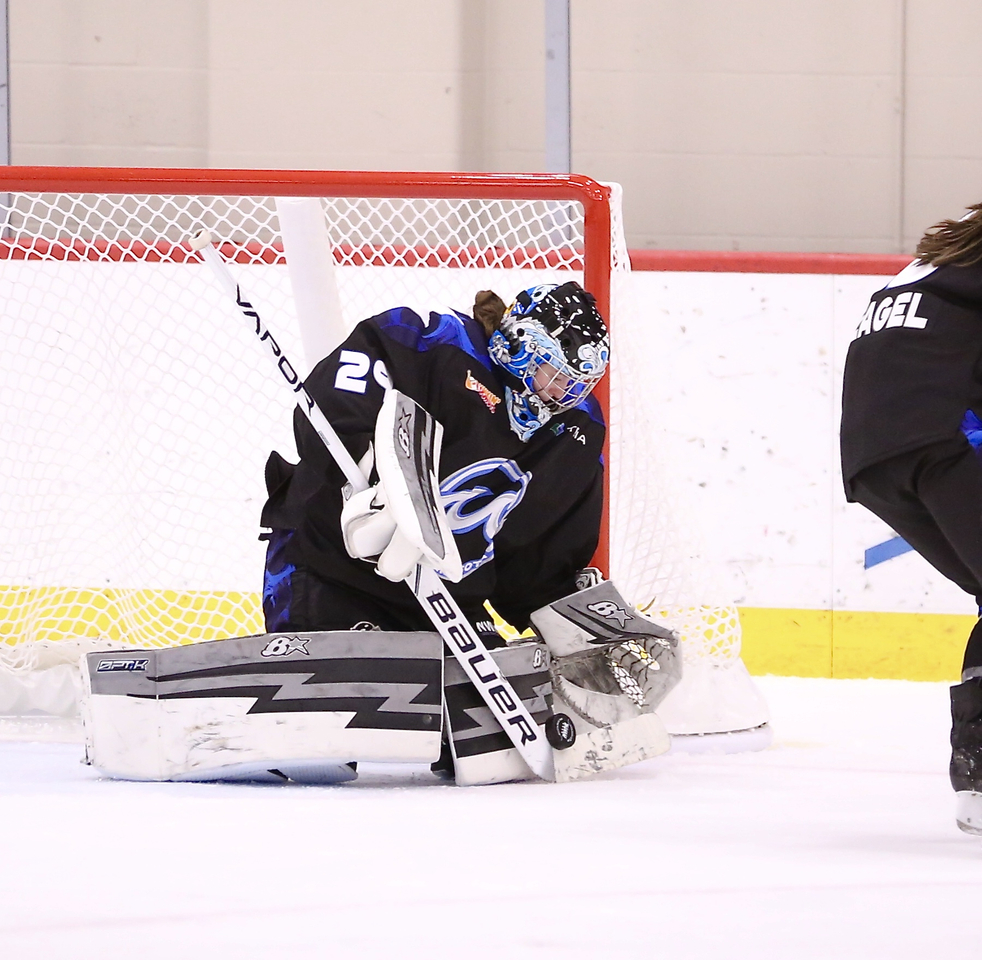 You mentioned having some outstanding coaching the last few years. Who are some of the people who have had an impact on your goaltending success?

Throughout my NWHL career I’ve been very blessed to have such great coaches, support staffs, teammates and training opportunities. I will forever be thankful to my goalie coaches Christian Gaffy, Mike Nepsa, Brennan Poderzay and Mike Murphy, who have provided exceptional training for me over the past three seasons.

We’re just a few days away from Opening Night at TRIA. How do you feel about beginning your defense of the Isobel Cup?

Excited is an understatement. Since the end of last season, I’ve been counting down the days until our team would get the opportunity to play in front of fans at TRIA again. There’s something so special about the Minnesota Whitecaps fans and about this year’s team.

One of the more rewarding things about playing in front of a sold-out crowd is being able to walk onto the ice and see so many young girls wearing the Whitecaps jersey. I’ve coached many of the young girls that go to our games, and knowing they have the opportunity to be coached by players on our team and give high-fives as we walk onto the ice is a testament to how much the women’s game has grown and the impact we make. Once the puck is dropped, the cheering fans add another element to our game. There’s nothing better than playing at TRIA!

You can see Leveille and the Minnesota Whitecaps begin their title defense on October 12 when they battle the Metropolitan Riveters in the first of a two-game weekend set at TRIA Rink. Tickets are available now at www.NWHL.zone/tickets

4 Maple Leafs Who Have Impressed (So Far)

All change between the pipes in Coventry