The 2020 NWHL All-Star Weekend in Boston started with an unforgettable All-Star Skills Challenge on Saturday, Feb. 8. Records were set, laughs were had, Brooke Stacey ended her season with a bang by scoring a goal in the Dunkin’ Full Team Shootout, and the Franklin Relay Race event proved to be a massive hit in its debut.

The historic weekend continued on Sunday with the Skate with the All-Stars Event, which provided fans of all ages a unique opportunity to share the ice with their favorite stars. Just a few hours later, at 2:30 p.m. ET, the players were back on the ice for the 2020 NWHL All-Star Game. Sunday’s main event was played in front of a sold-out, standing-room-only crowd at Warrior Ice Arena with thousands of fans watching the action streaming live on Twitch.

Grace Klienbach of the Connecticut Whale displaying her edgework in the Chipwich Fastest Skater event. Klienbach won the event for Team Packer with a time of 13.6 seconds. 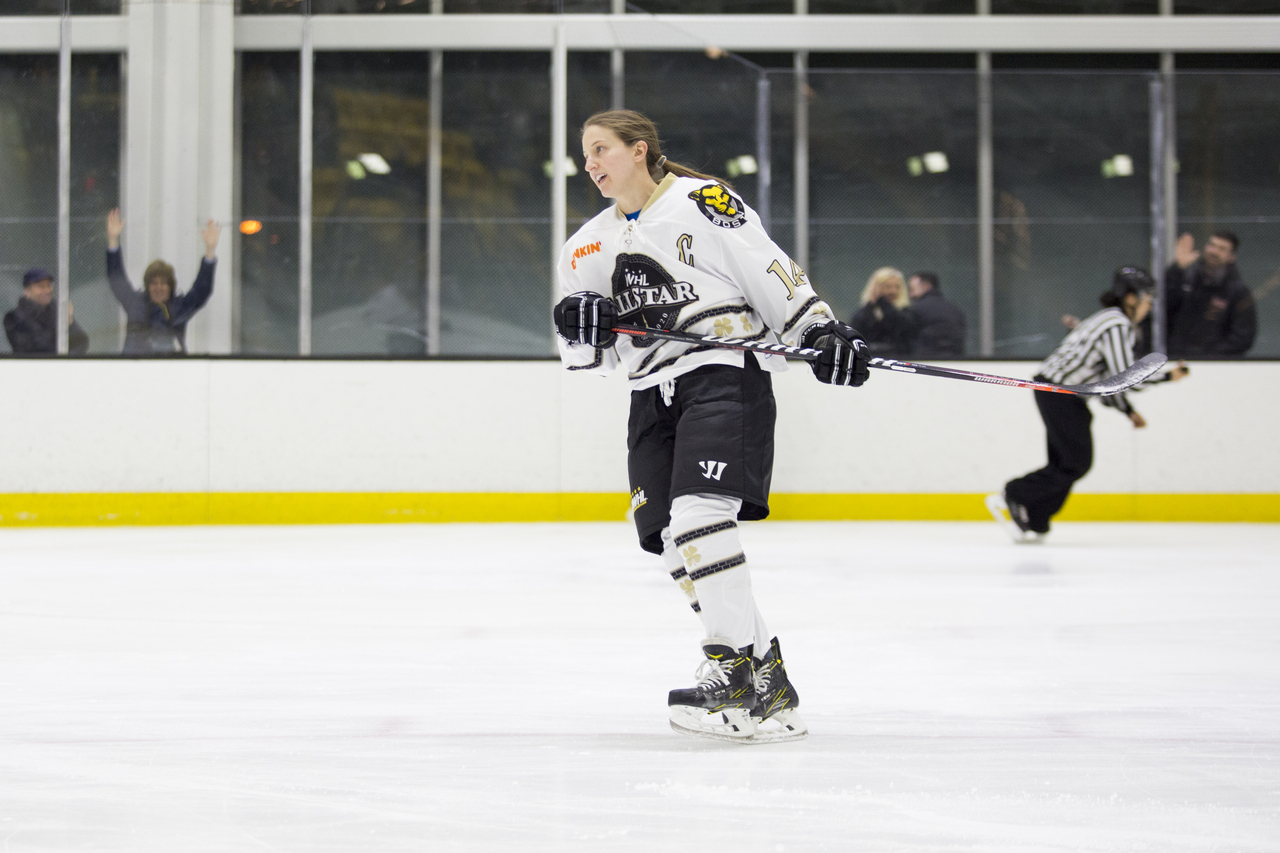 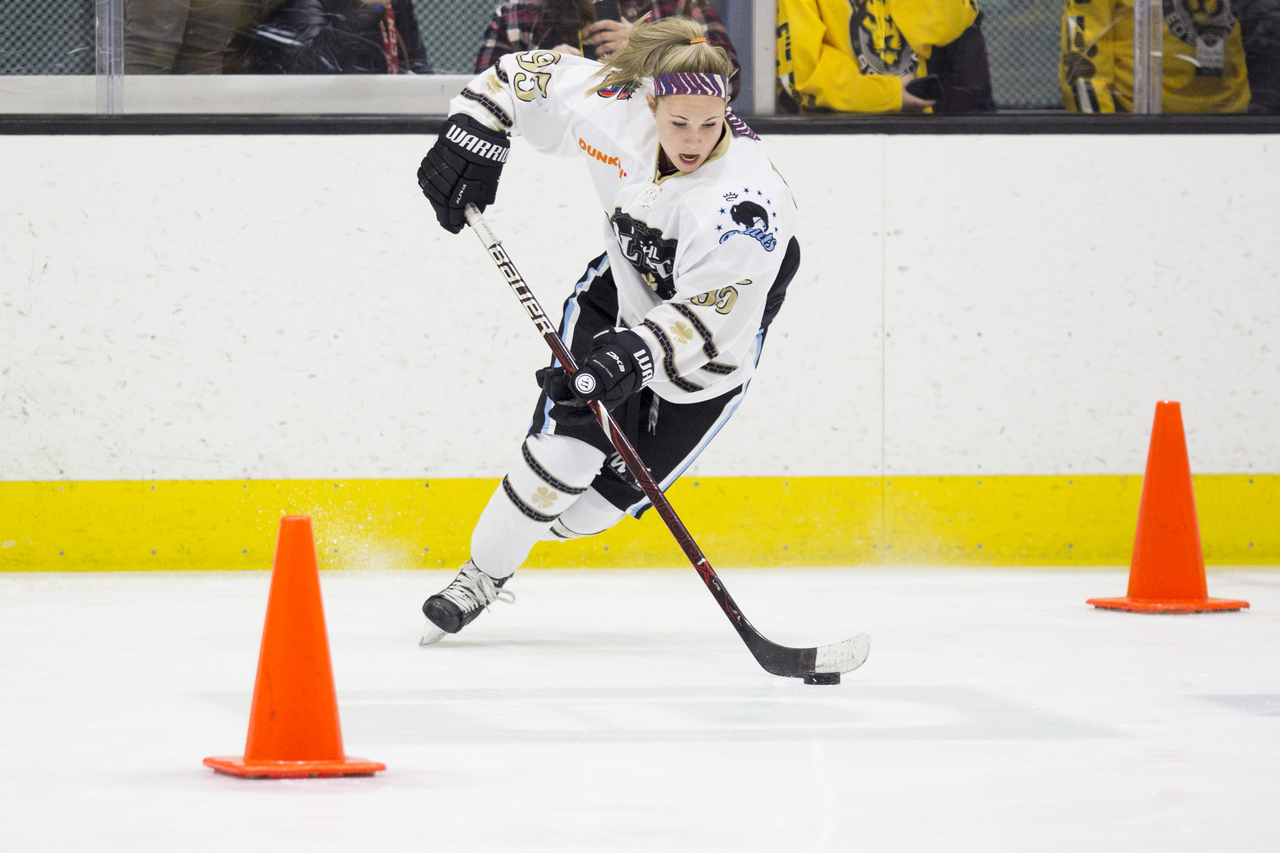 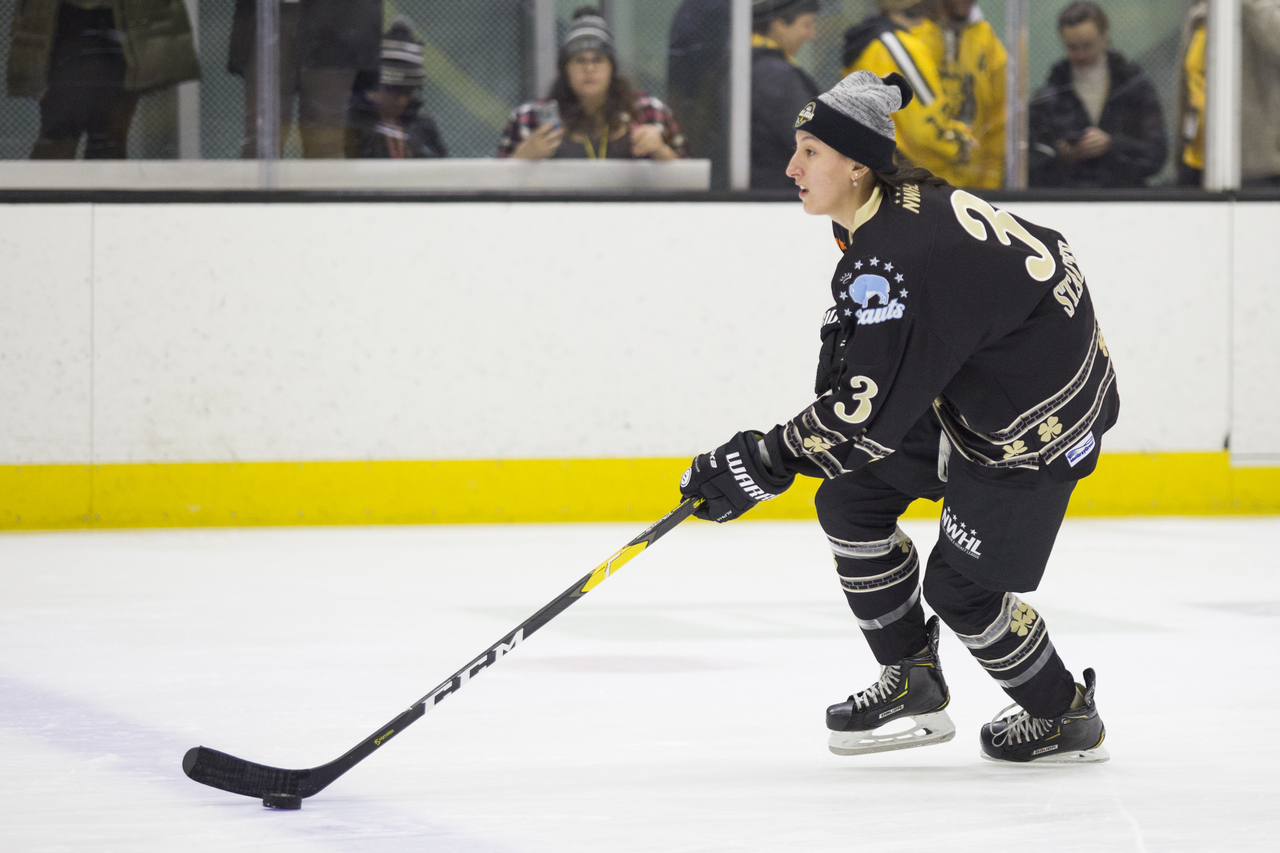 Brooke Stacey, who announced on Feb. 4 that she would be making her final appearances of the 2019-20 season at the 2020 NWHL All-Star Weekend, scored a goal for Team Packer in the Dunkin’ Full Team Shootout. Stacey and her partner are expecting their first child. 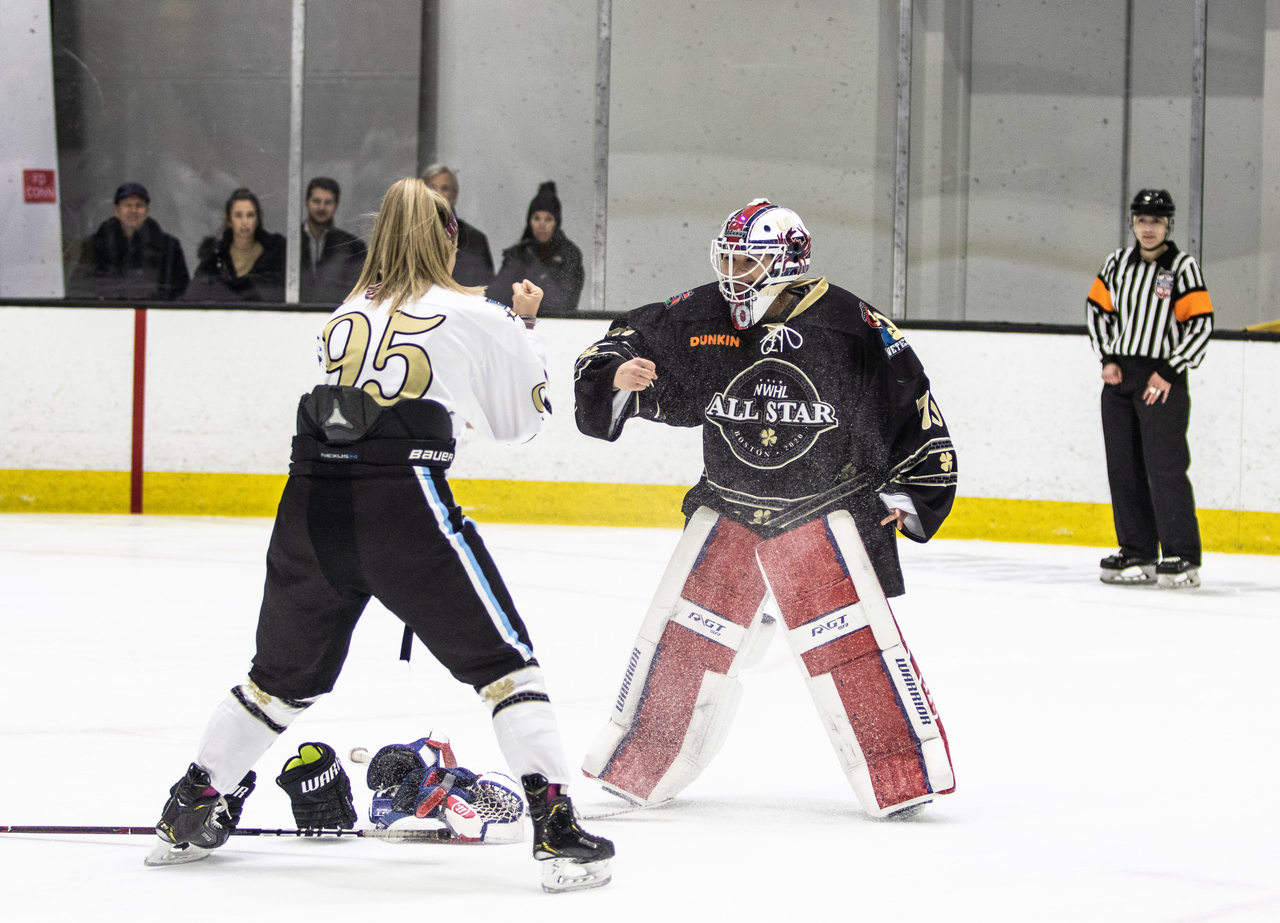 The Dunkin’ Full Team Shootout concluded with a game of rock-paper-scissors between Accursi and Metropolitan Riveters goaltender Sam Walther that resulted in Walther picking up Accursi’s gloves and stick to score a goal with Accursi defending the net. 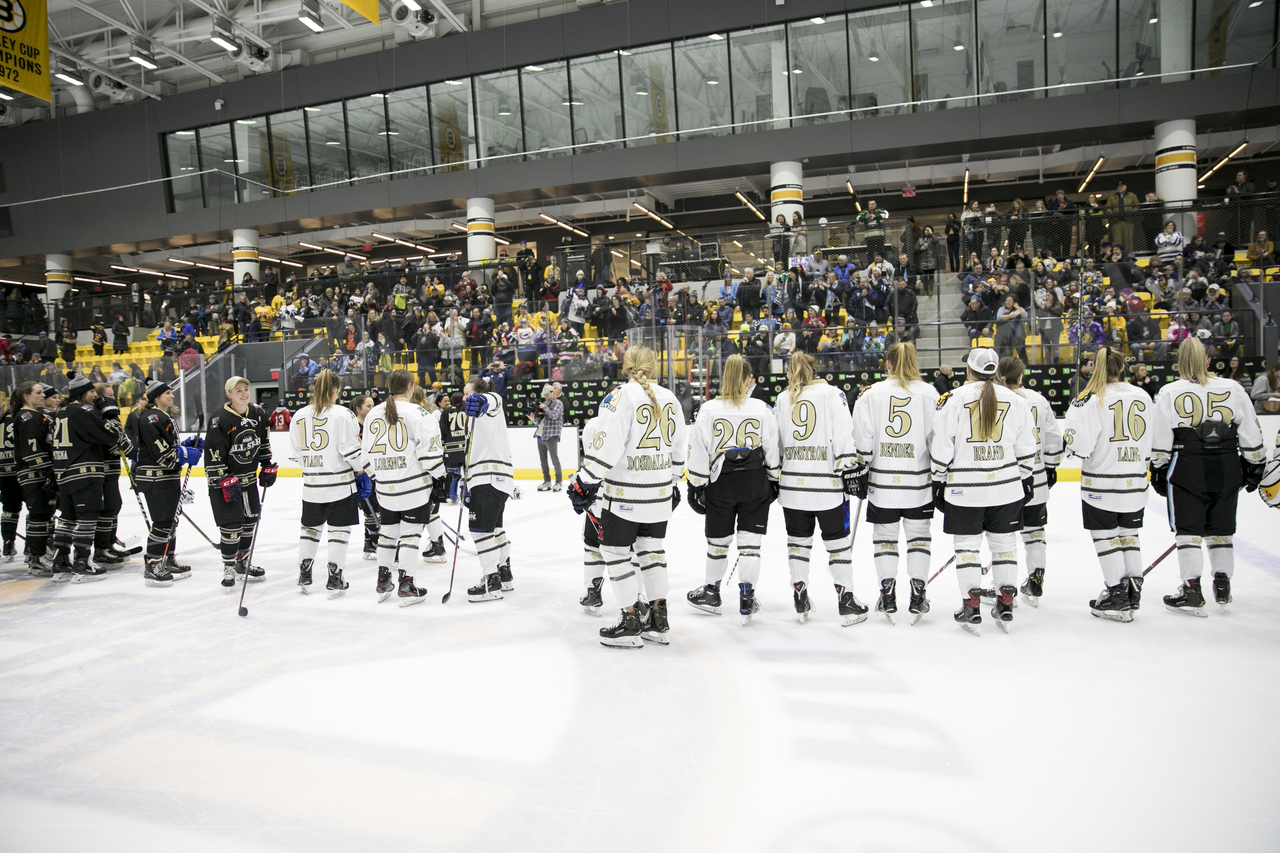 The 2020 NWHL All-Stars from Team Packer and Team Dempsey saluting the sold-out crowd after Team Packer prevailed in the All-Star Skills Challenge. 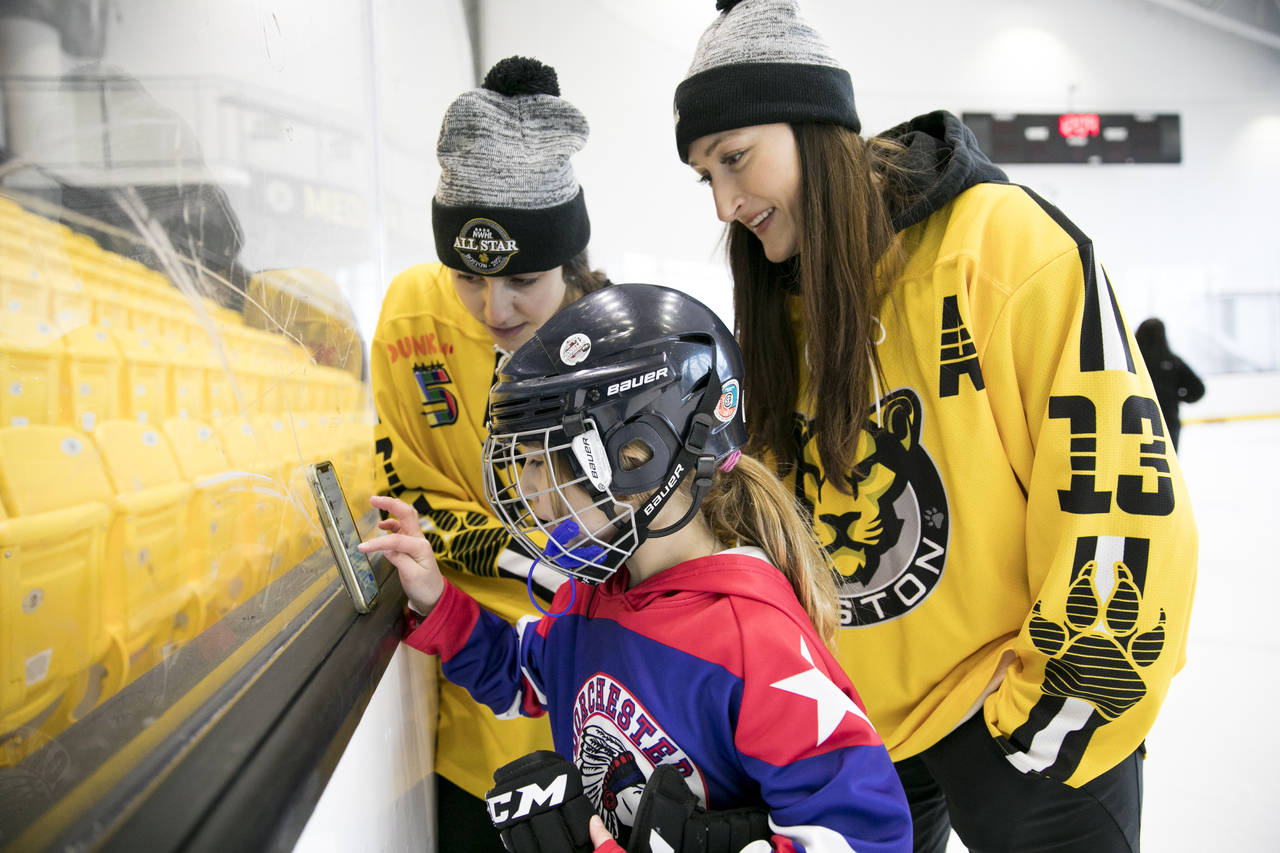 Kaleigh Fratkin and Christina Putigna of the Boston Pride helping a young fan make a TikTok video during the Skate with the All-Stars event. 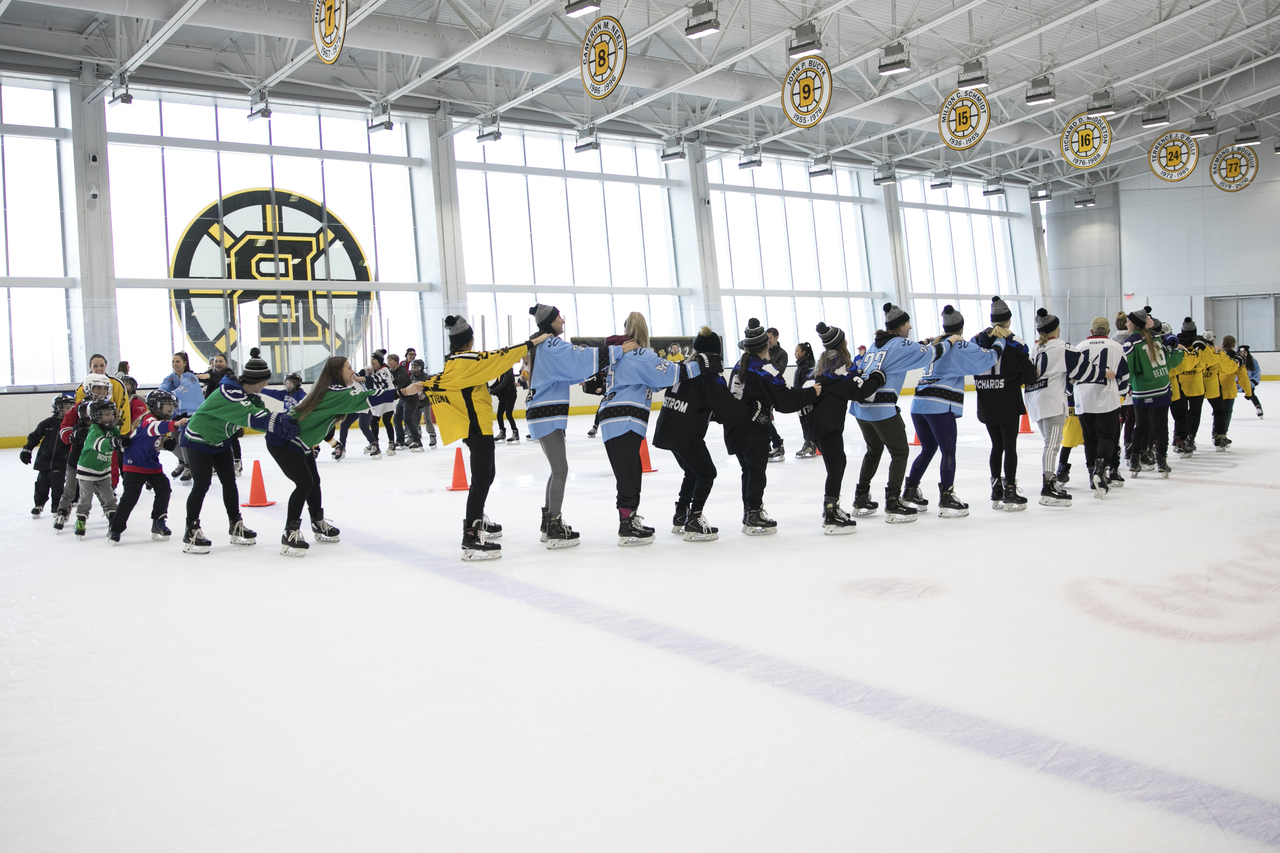 All-Stars and fans forming a conga line during the Skate with the All-Stars event at Warrior Ice Arena just a few hours before the 2020 NWHL All-Star Game. 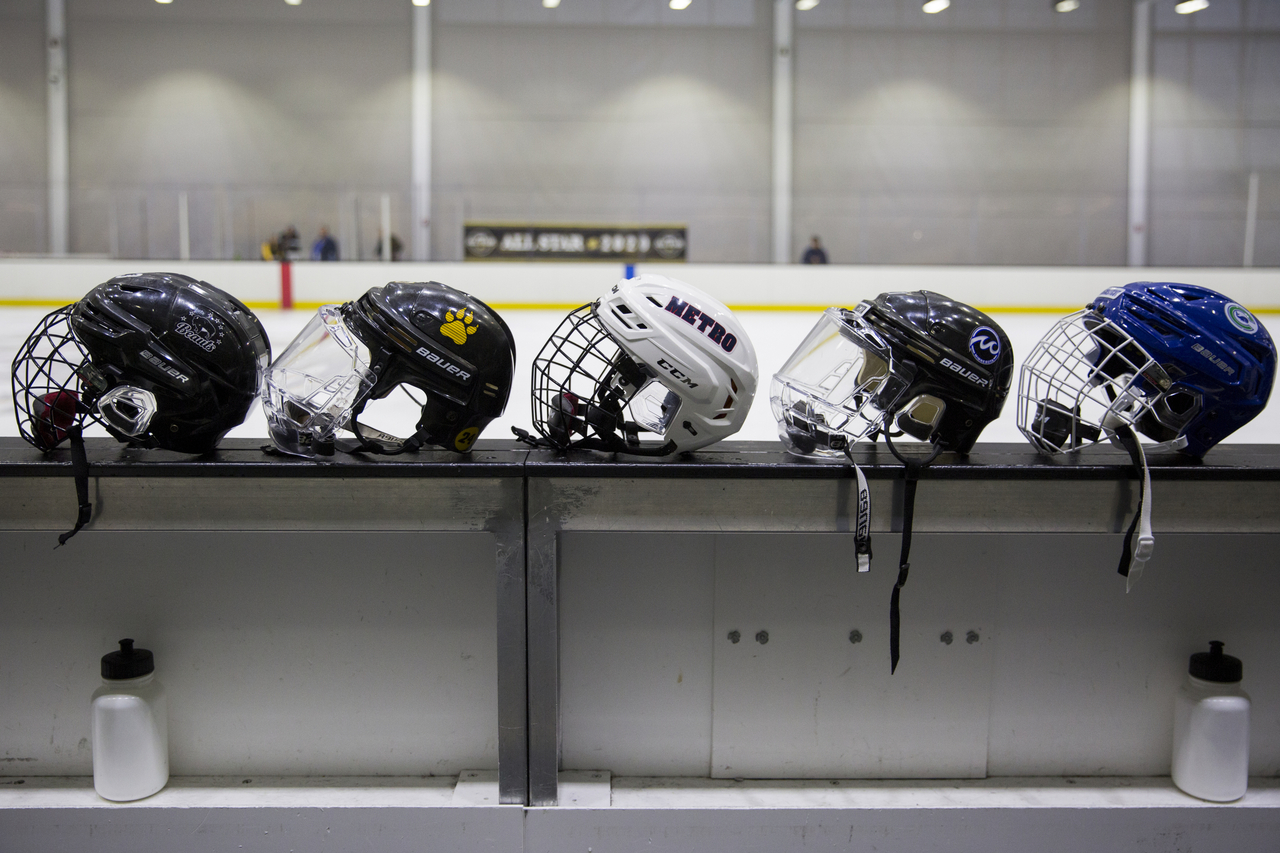 The calm before the storm. A skater’s helmet from each of the NWHL’s five teams lined up on the bench boards before the beginning of the 2020 NWHL All-Star Game. 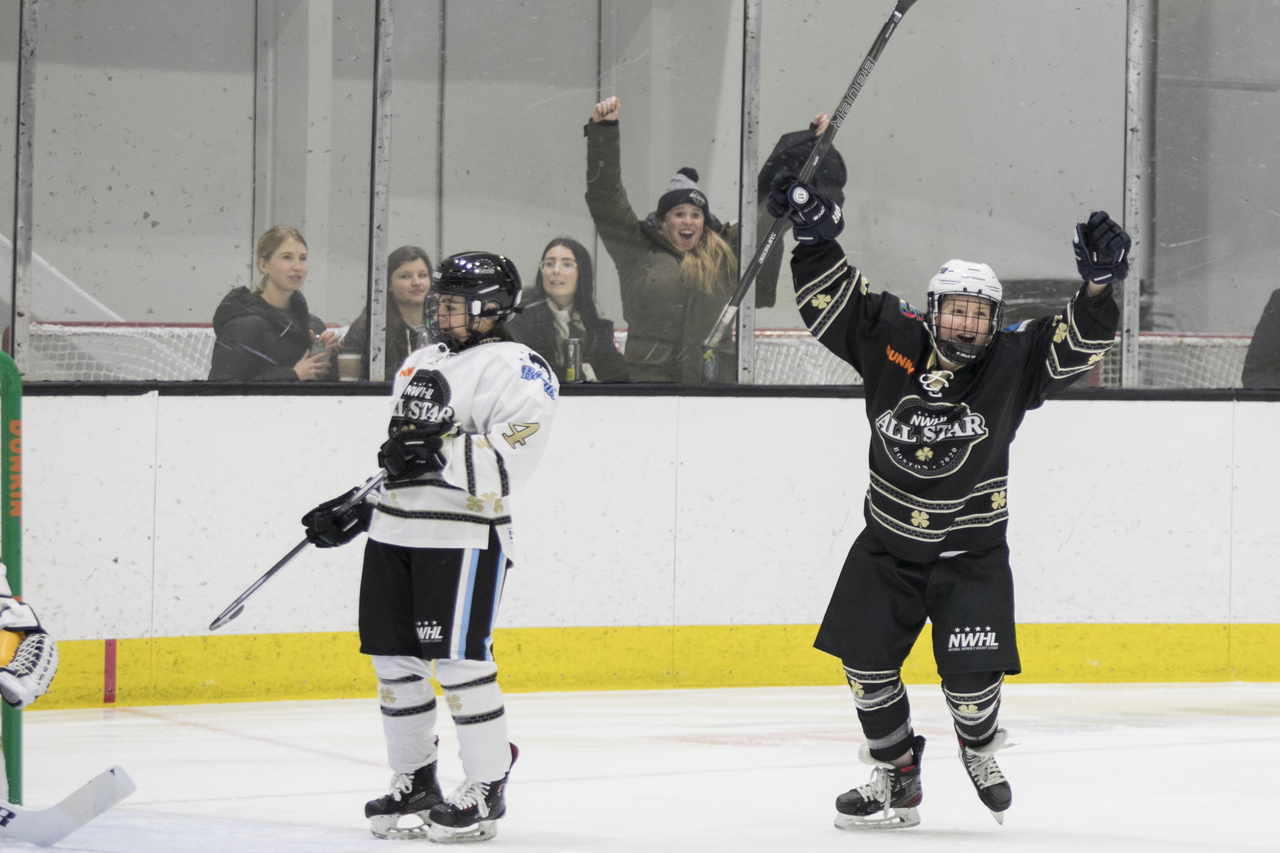 Team Packer’s Kate Leary celebrating the first goal of the 2020 NWHL All-Star Game. Leary scored at the 5:08 mark of the first period. Her goal was assisted by her Riveters’ teammate and linemate Madison Packer. 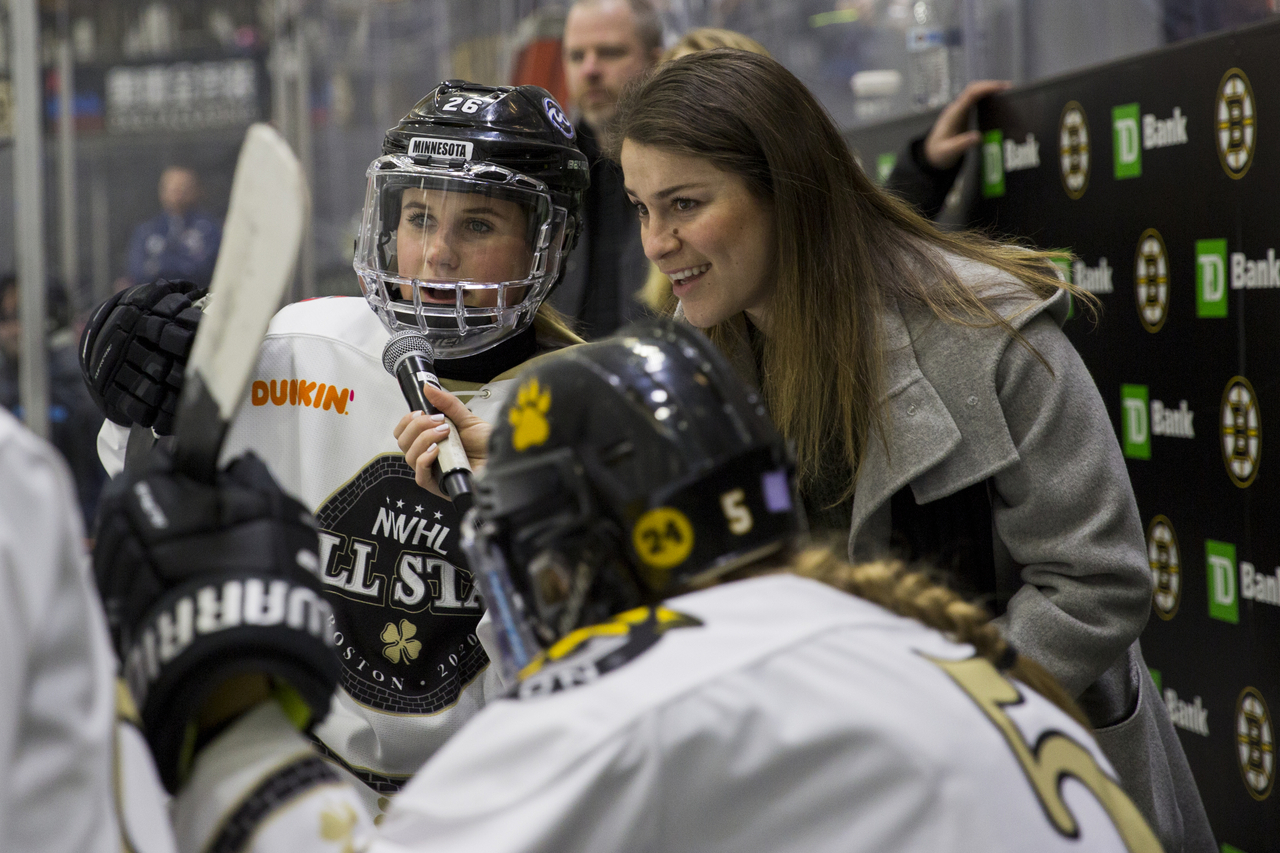 Anya Packer, Director of the NWHLPA, interviewing Nicole Schammel of the Minnesota Whitecaps on the bench after she scored a goal that gave Team Dempsey a 2-1 lead in the first period.

Team Packer’s Christina Putigna making a pass to the slot in front of a sold-out crowd at Warrior Ice Arena in Boston, MA. 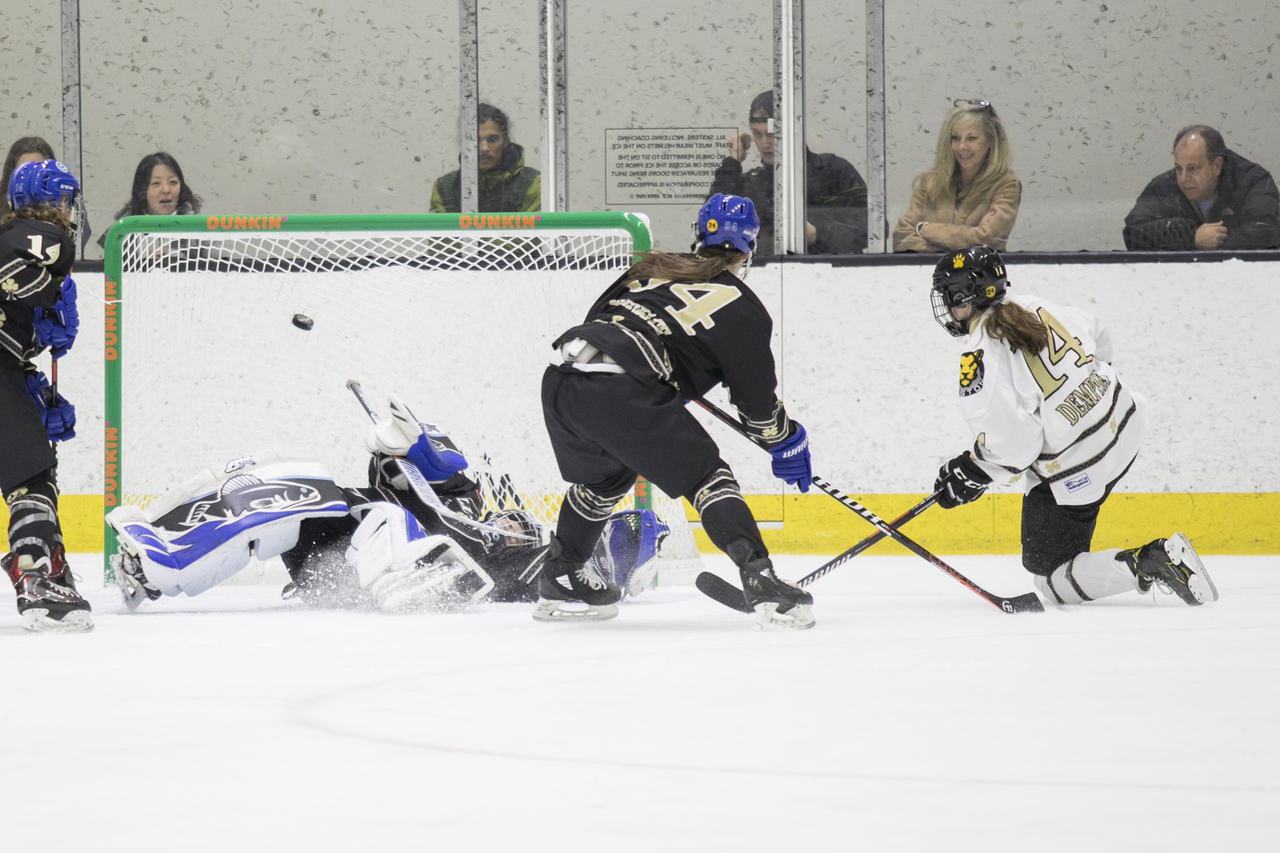 The dagger. Jillian Dempsey firing home a power-play goal to give Team Dempsey a 4-2 lead with less than four minutes remaining in regulation. 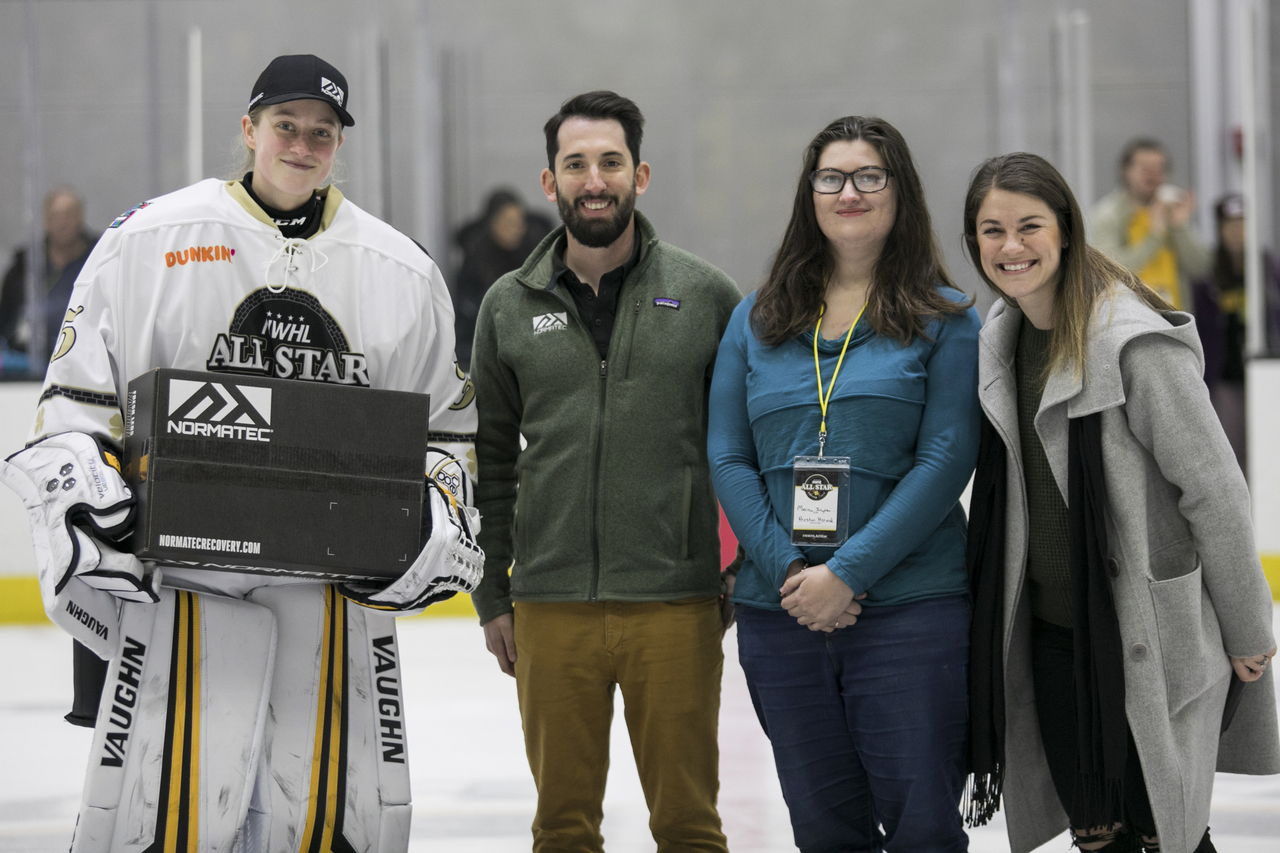 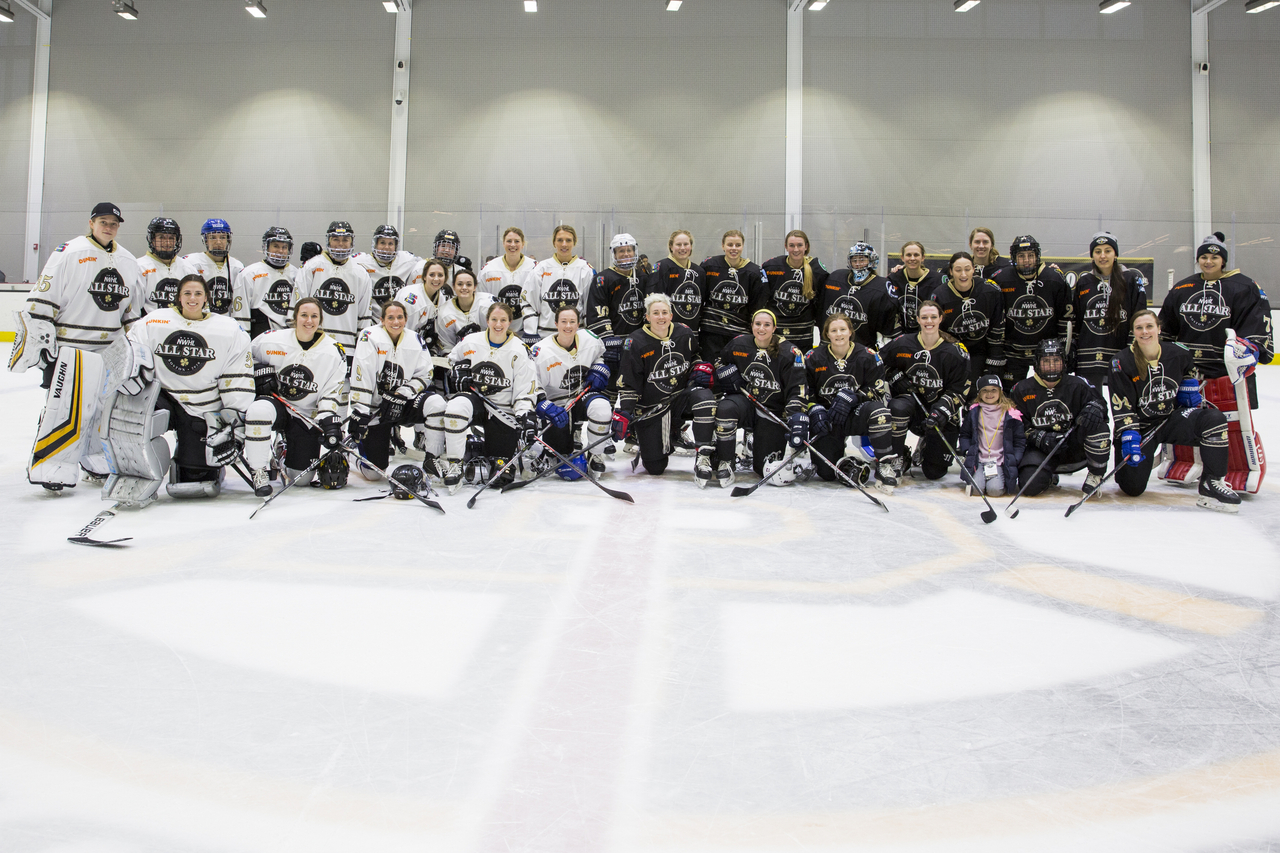