The game was played in Boston’s home rink, the TD Garden arena. This Game 1 between two division rivals, Original 6 rivals, regular playoff opponent rivals, promises to be a good one.

The first period was as exciting a beginning as one could have hoped for. Both teams were playing with incredibly high intensity, as one would expect from a playoff contest.

The Leafs were dominating the faceoff circle, an area they’ve struggled in in the past, against Boston in particular. Leading with Bergeron is a luxury not many teams have, for many reasons, but faceoffs is one of them.

The Bruins were first to strike, on a powerplay chance which was the first penalty of the game. This slick pass by Brad Marchand is finished smoothly by Patrice Bergeron to put the Bruins up 1-0:

Marchand hits the seam. Bergeron makes it 1-0 on the PP. pic.twitter.com/vOefnHTyJF

The Bruins were making a push to run away with this game, but Toronto would have none of it. This great play by Nikita Zaitsev to break up the rush held the Bruins back.

Zaitsev with a diving play to stop the odd-man rush. pic.twitter.com/RkPIy9wYXI

It didn’t take long for the Leafs to claw momentum, though. It started with this monstrous hit by Connor Brown forechecking on Marcus Johnsson:

And, it finished with this strong offensive zone shift by the Tavares line led to this scrambled play in front of the net, finished quickly by Mitch Marner to tie the game at 1’s:

Tips the point shot and then buries the bounce off the post. 1-1. pic.twitter.com/5rsdx428nx

As the end of the first period drew near. Patrick Marleau had a fantastic break, but was unable to find the top corner to take the lead:

Marleau gets some time and space but misses just wide to end the 1st. pic.twitter.com/GtUP9hKOPj

The period ended not long after that chance, with the game tied at 1-1.

Here is a heat map from naturalstattrick.com showing the shot attempts in the period, clearly illustrating that Toronto had the edge in the first frame:

The Leafs started the period taking an unfortunate penalty to put the Bruins on the powerplay again for their second personnel advantage of the game. But a quick play by Mitch Marner was able to chip the puck out of the zone and leap forward on a breakaway, and drew a penalty shot. Here’s his penalty shot goal, which put the Leafs up 2-1 on his second goal of the game:

The Bruins finished the powerplay opportunity with a couple good chances, but were unable to capitalize.

A back and forth period ensued but the teams were finding no advantages. Both teams looked threatening though, and this Matthews shot off the post highlighted that:

What a scoring chance for Matthews here. #LeafsForever pic.twitter.com/5IyRFDWSsy

The period was drawing to a close and it looked as if the team had each resigned to a more conservative style. But Nazem Kadri broke that funk, with an incredible pass to William Nylander who finished on Rask 5-hole:

The Leafs kept the fire-y offense going, as Tavares got his own breakaway, but this one was stopped by Tuukka Rask:

Tavares gets a great chance on the breakaway. #LeafsForever pic.twitter.com/VgoZzDrOUj

And another chance with just seconds to go, and another great stop by Tuukka Rask, by Matthews and Kapanen:

Leafs get a 3 on 1 but Rask stones Matthews with a toe save. pic.twitter.com/ySWVm8Kr7F

The period ended with the Maple Leafs leading 3-1, heading into the 3rd period. Here is the updated heat map, from naturalstattrick.com, showing that the Bruins have evened the total chances out, but haven’t gotten into the scoring chance area quite as much as the Leafs. They seem to be getting more of their opportunities in the very high slot, both on the rush and on the cycle, and that’s confirmed here in the heat map. 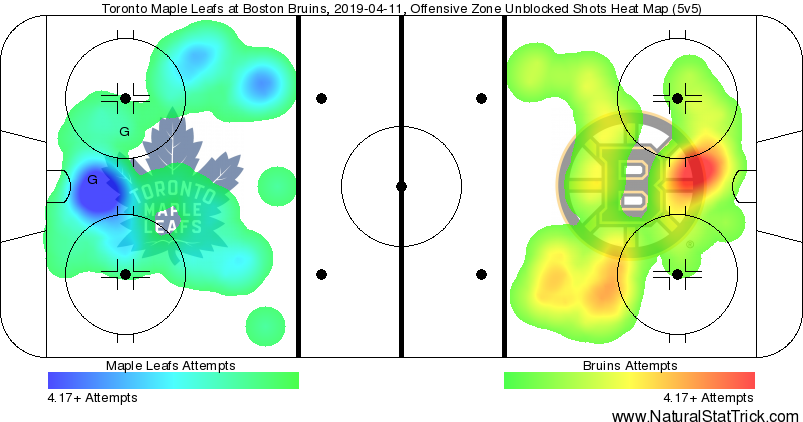 The action slowed down a fair bit in the final frame of the game, as the Leafs just seemed to roll through their lines, and kept very even keeled.

Chara, who had been interfering with Toronto players throughout the contest, finally was called for a penalty against Nylander. The Leafs, however, were unable to turn the advantage into an insurance goal.

The Bruins pulled their goalie with over 2:30 left in the period, and the Leafs seemed content to just chip it out and let the Bruins come at them. However, luckily, John Tavares was able to win a faceoffs and find the empty net to put the Leafs up 4-1.

The final heat map from naturalstattrick.com looked like this, showing the Bruins gaining ground over the course of the game as the desperation sunk in, and as the Leafs eased off the gas pedal while sitting with the lead:

The Toronto Maple Leafs won this game with merit, unquestionably. They were better in every area of the game. Admittedly, they had some luck, as the Bruins hit a few posts that could have easily put them closer in this game. However, on the whole, the Maple Leafs were the better team.

The Bruins started to pull back the shot attempts game in the late second and throughout the 3rd, as is expected when the opponent is leading throughout the game. Here’s the full game shot tracker, thanks to naturalstattrick.com:

Despite an early advantage in the faceoffs department for Toronto, the Bruins did claw back and make it exactly even. Each team won 50% of the draws tonight.

Overall, the whole team was great. Everyone played up to expectations or higher, which is what you need in the playoffs. If anyone slips, it can be in the back of the net and that can be the series before you know it.

The next game will be at 8 pm on Saturday night, for Game 2 in Boston. See you there, and GO LEAFS GO.

Minnesota Duluth hockey is returning to the National Championship game

Hey NHL GMs, do you know who Scott Sandelin is? Because he’s a pretty darn good coach

With Evason and Kaprizov in the fold, Wild...

Takeaways from the Day 1 Line Rushes –...

The top 10 prospects to get NHL post-season...

Why eliminating the UFA negotiation window is a...

What to expect from Justin Holl this summer...

Leafs to get prime time slot for qualifying...