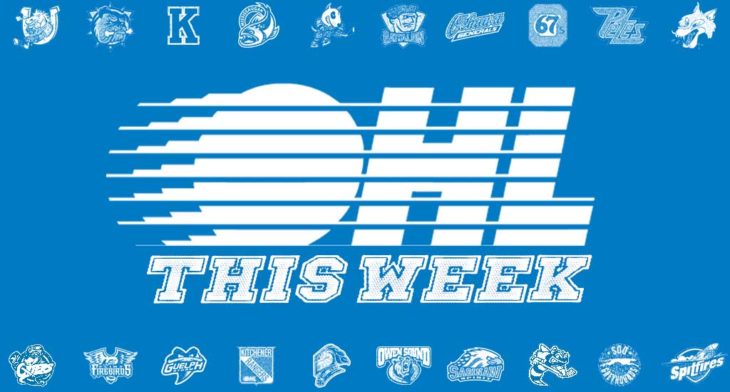 OHL This Week is back! Get caught up on everything you need to know with the 2019-20 OHL season a week away.

OHL PLAYERS AT 2019 NHL TRAINING CAMPS:
A total of 141 OHL players attended Rookie Camps this past week, and several of those names will be headed to Main Camp as rosters continue to trickle in throughout the week.
• FULL LIST / OHL STANDOUTS AT NHL PROSPECTS TOURNAMENTS

ROGERS HOMETOWN HOCKEY TOUR FEATURES STOPS IN HAMILTON AND OTTAWA:
The sixth edition of the Rogers Hometown Hockey Tour features 23,907km of travel over 25 weeks and includes stops in two OHL cities. The Hamilton Bulldogs (Jan. 19th) and Ottawa 67’s (Feb. 9th) will have hosts Ron MacLean and Tara Slone right in their back yard for an action-packed weekend both on and off the ice.
• FULL TOUR DETAILS

ROAD TO THE OHL CUP: NATIONALS WIN 12TH ANNUAL TITANS TOURNAMENT:
The 2019-20 Minor Midget season got off to a running start in Toronto this past weekend as the Titans held ther 12th annual Prospects Tournament with 53 teams in attendance. In what’s been considered an underdog triumph by many, the Toronto Nationals stopped the powerhouse Toronto Jr. Canadiens, taking a 5-2 victory in Sunday’s Championship Final, overcoming a 2-0 deficit with five unanswered goals.
• FULL TOURNAMENT RECAP

CHL UNVEILS NEW CCM QUICKLITE UNIFORMS:
For the first time since 2009-10, all 60 teams in the Western Hockey League, Ontario Hockey League, and Quebec Major Junior Hockey League will sport two redesigned jerseys for the start of a new campaign. The CCM QuickLite concept modernizes the hockey uniform and provides players with a lighter jersey, enhanced range of motion, and the comfort to further improve performance.
• READ MORE / OHL PHOTO GALLERY

WARREN RYCHEL TAKES OVER COACHING DUTIES IN BARRIE:
The Barrie Colts announced Monday that three-time Memorial Cup champion Warren Rychel will take over as head coach of the club in the absence of Dale Hawerchuk. Rychel was the architect of Windsor Spitfires Memorial Cup championships in 2009, 2010 and 2017 and steps behind the Colts bench to begin their 25th OHL season.
• READ MORE

OFFSEASON FULL OF OHL PLAYER COMMITMENTS:
We’ve had a lot of new additions to the Ontario Hockey League since the last edition of OHL This Week. For a full rundown including the latest commitments of Zacharie Giroux (Flint), Jesse Fishman (Kitchener), Kalle Loponen (Sudbury) and many more, visit ontariohockeyleague.com.
• FULL LIST OF PLAYER COMMITMENTS

Forecasting fun at OHL rinks in 2019-20: As teams roll out their 2019-20 promotional calendars there’s always some cool new looks across the league – catchy theme nights capturing the spirit of your favourite television show or an age-old team tradition circled on the schedule for another season. We take a look at a few of those fan favourites across the league – some old and some new.
• READ MORE

OHL teams make the most of quiet week with fan engagement, team-building activities: With rosters a little thin with all of the players currently off at NHL Rookie Camps this past week, OHL clubs took advantage of some free time engaging fans and the surrounding community. Several OHL clubs held season ticket holder barbecues, fan fest events and some teams even held team-building activities. It was a quiet weekend on the ice, but OHL teams were still busy. Here’s a quick look at what took place.
• READ MORE

Sting welcome local golfing hero Mike Weir to home opener: The Sarnia Sting welcome Bright’s Grove native and 2003 Masters Champion Mike Weir to their home opener on Friday September 20th when they kick the season off at home to the Hamilton Bulldogs. The golf legend has launched a campaign to raise money for a youth mental health facility in Sarnia-Lambton.
• READ MORE AT SARNIASTING.COM

Storm host first annual Rita Let’s Kids Play Night at home opener: The Guelph Storm will host the first annual Rita Let’s Kids Play Night on Friday September 20th when they kick-off the season with an OHL Championship rematch against the Ottawa 67’s. Rita Let’s Kids play is a program established by Rita Campbell’s daughter Kim in conjunction with Guelph Minor Hockey to honour the long time Storm Ambassador and City of Guelph Volunteer. Rita was known for helping under privileged kids by often buying equipment or paying registration fees. As such, Guelph Minor Hockey and the Storm are asking fans to donate any new or used ringette or hockey equipment at the game on Friday September 20th to continue Rita’s tradition.
• FULL DETAILS AT GUELPHSTORM.COM

Gilmour, Richardson and Roberts forego overage seasons in pursuit of education: Three overage candidates in Saginaw’s Brady Gilmour, Kitchener’s Luke Richardson and Guelph’s Zach Roberts have decided to go to school. Gilmour will attend the University of New Brunswick and suit up for the Reds Men’s Hockey program. Richardson will enrol at Queen’s University and join the defending Queen’s Cup champion Gaels on the ice. Roberts will remain in Guelph and play for the University of Guelph Gryphons Men’s Hockey team this fall.

Thornton signs one-year deal in San Jose: Joe Thornton is signed up for another year in San Jose. The 40-year-old Soo Greyhounds graduate put up 51 points (16-35–51) over 73 games in San Jose last season but fell short of the coveted Stanley Cup that has eluded him throughout his 1,566-game NHL career. The St. Thomas, Ont. native and former OHL Rookie of the Year has amassed 1,478 points over his NHL career.

Jordan Subban signs pro contract in Austria: After four seasons in the American Hockey League, Jordan Subban is taking his game to Austria. The 24-year-old former Belleville Bulls standout has inked a contract with Dornbirner EC of Austria’s top pro circuit after putting up 18 points (3-15–18) over 48 games with the Toronto Marlies last season. Subban, who led the OHL in goals by a defenceman with 25 in 2014-15, spent time in the Vancouver, Los Angeles and Toronto farm systems after originally being a fourth round pick of the Canucks in 2013. He is the younger brother of New Jersey Devils defenceman P.K. Subban and Vegas Golden Knights goaltender Malcolm Subban, who were also graduates of the Bulls program.

Blossoming in the desert | TheAHL.com

A Statement to the Players, Fans and...