The emotional highlight was the surprise participation of Brooke Stacey as a competitor in the Franklin Accuracy Shooting competition and the Dunkin’ Full-Team Shootout, where she scored for Team Packer. The Buffalo Beauts forward, who was announced as sidelined for the remainder of the season because of the joyous news that she and partner Dylan Smith are expecting their first child, was originally expected to be one of the passers in the event. Today, feeling good and excited to take her shots, Stacey decided to be on the receiving end of those passes and step up for Team Packer in the shootout.

Other highlights were Grace Klienbach’s thrilling lap in 13.60 seconds to win the Chipwich Fastest Skater challenge, Kaleigh Fratkin’s victory in the Franklin Hardest Shot event, the debut of the Franklin Team Relay Race, and, of course, the hilarity and creativity that’s become a staple of the Dunkin’ Full Team Shootout.

“I was really nervous to be the first skater of the first event. I was thinking, ‘Ohh, I don’t know if I like that,'” Klienbach said after the Skills Challenge. “It was pretty nerve-wracking but exciting and I just reminded myself that it was all for fun!”

With a time of 18.85 seconds, Mariah Fujimagari of Team Dempsey took the Chipwich Fastest Goalie event, beating Leveille by a few strides.

Boston Pride captain Jillian Dempsey, the NWHL’s all-time leading scorer, put on a show in the Franklin Accuracy Shooting Event. Dempsey nailed all four of her targets in 9.6 seconds, setting a new NWHL All-Star record. For a moment, it looked like Madison Packer might give Dempsey a run for her money, but Team Packer’s captain was foiled by the iron and finished with a time of 13.54 seconds.

“I love this city,” Dempsey said. “To be able to play in this city and for this organization is amazing. Going out there for the Accuracy Shooting was a lot of fun. It’s something that I don’t necessarily practice, but I practice picking corners and shooting. It was exhilarating to do it with my teammates Lexie [Laing] and McKenna [Brand].”

Kaleigh Fratkin of the Boston Pride claimed the title of the hardest shot in the NWHL with her 76 MPH slap shot in the Slalom Hardest Shot Event. Corinne Buie of the Buffalo Beauts and Audra Richards of the Minnesota Whitecaps came within striking range with 73 MPH slap shots but were unable to match Fratkin’s big blast.

“Taking all of those slap shots during games really paid off!” Fratkin said after the Skills Challenge. 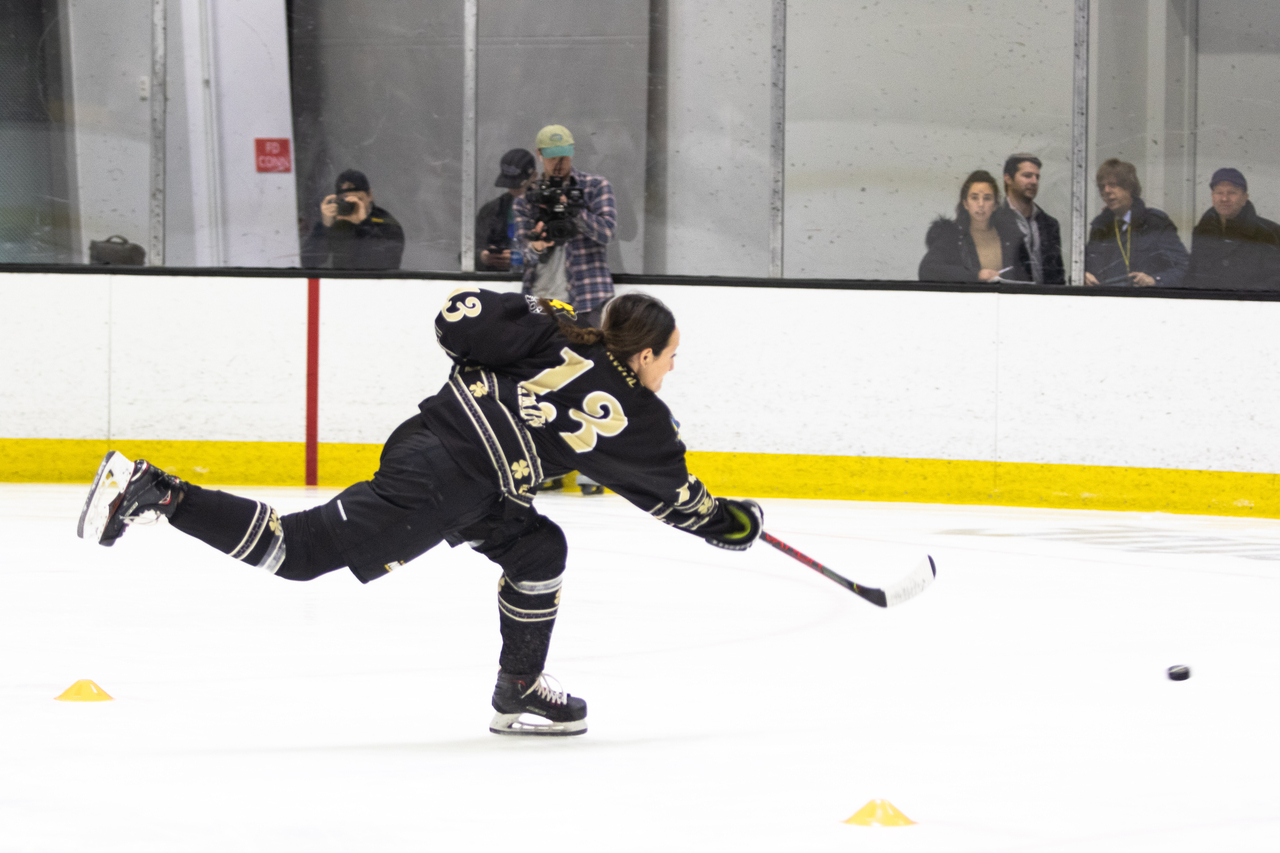 It’s safe to say that the Franklin Relay Race was a hit with the fans. All eight skaters in this event put on a show that resulted in a few lead changes and a finish that came right down to the wire. Fortunately for Team Dempsey, Buffalo Beauts’ defender Marie-Jo Pelletier came through the in clutch with a nearly flawless final lap to steal the win.

After some wildly entertaining back-and-forth action, Sam Walther won a game of rock, paper, scissors against Taylor Accursi and scored for Team Packer using Accursi’s gloves and stick. When all was said and done, Team Packer buried one more puck than Team Dempsey, thus winning the Dunkin’ Full Team Shootout and the 2020 NWHL All-Star Skills Challenge.

Confidence and patience the keys to Brochu’s winning...