The 2022 NHL Winter Classic will be played between the St. Louis Blues and Minnesota Wild at Target Field in Minneapolis, Minnesota on Jan. 1. It will be the 12th time the NHL holds a Winter Classic and the first since Jan. 1, 2020.

This year’s game will be full of amazing scenery, great sweaters and frigid weather.

What it will also be full of: Former college hockey players on both benches.

In total, 15 players between the Wild and Blues spent time in college hockey. The Blues narrowly edge out the Wild, 8-7, for number of former NCAA players on the active roster.

The Blues roster is according to NHL.com as of Dec. 28. The same standard was used for the Wild.

– Nick Bjugstad (Minnesota, 2010-13): This game will mean a lot for Bjugstad. The hometown kid grew up in Minneapolis, played his college puck at Minnesota and now skates for the Wild. Bjugstad enjoyed a standout college career, posting 54 goals and 98 points in 109 games for the Golden Gophers over three seasons.

– Brandon Duhaime (Providence, 2016-19): Duhaime spent three seasons at Providence where he scored 72 points in 117 games for the Friars.

– Alex Goligoski (Minnesota, 2004-07): Before playing 16 years in the NHL, Goligoski spent three seasons with the Golden Gophers. He was a standout defenseman for Minnesota, posting 98 points in 117 games. The state of Minnesota means a lot to Goligoski. Along with playing for the Wild and the Gophers, his hometown is Grand Rapids, Minnesota.

THE ELITE: Here are the best men’s college hockey players from the first half

– Jordan Greenway (Boston University, 2015-18): The former second-round pick posted 92 points over 112 games for the Terriers. Since entering professional hockey, he’s only ever been with the Wild organization. 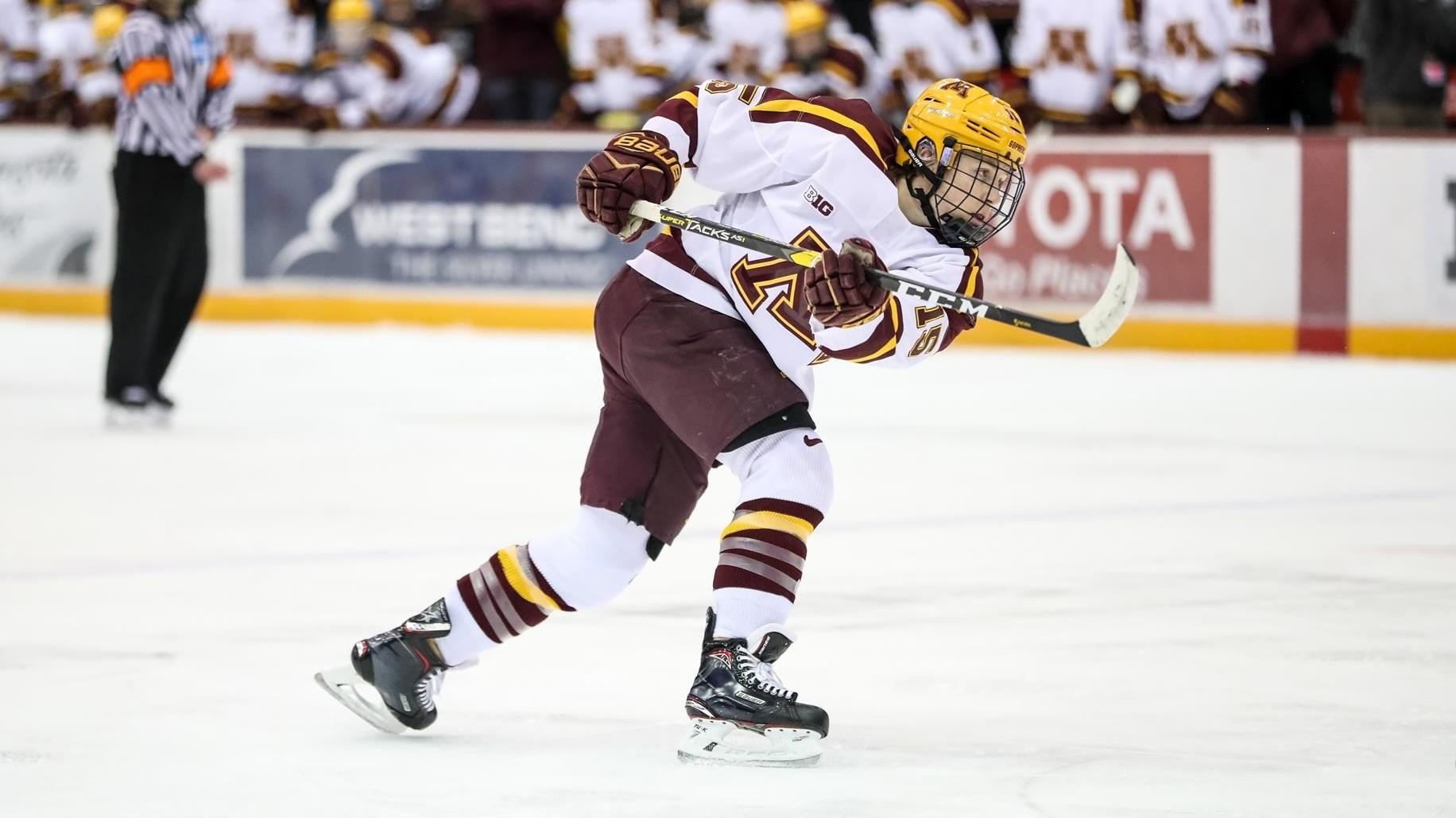 – Cam Talbot (Alabama-Huntsville, 2007-10): Talbot spent three seasons in net for Alabama-Huntsville. The Caledonia, Ontario native had his best season in his third and final year with the Chargers, posting a 2.61 goals against average and .925 save percentage over 33 games.

– Tyler Bozak (Denver, 2007-09): Bozak spent two seasons with the Pioneers, posting 57 points in 60 games. His sophomore season was cut short due to a torn meniscus in his left knee. He signed with the Toronto Maple Leafs in 2009.

– Torey Krug (Michigan State, 2009-12): Krug played three seasons at Michigan State where he made a name for himself as a dynamic, offensive defenseman who more than made up for his lack of size. The Livonia, Michigan native scored 83 points in 114 games for the Spartans.

FIRST HALF RANKINGS: Here is the Power 10 of the first half of this men’s college hockey season

– Charlie Lindgren (St. Cloud State, 2013-16): Lindgren backstopped the Huskies for three seasons, serving as the starter for two. His best came in his final year at St. Cloud, posting a 2.13 GAA and .925 save percentage.

– Colton Parayko (Alaska-Fairbanks, 2012-15): The core of the Blues defense is made up of former college hockey players and Parayko is a huge part of that. He logged three seasons for the Nanooks, posting 66 points in 104 games. 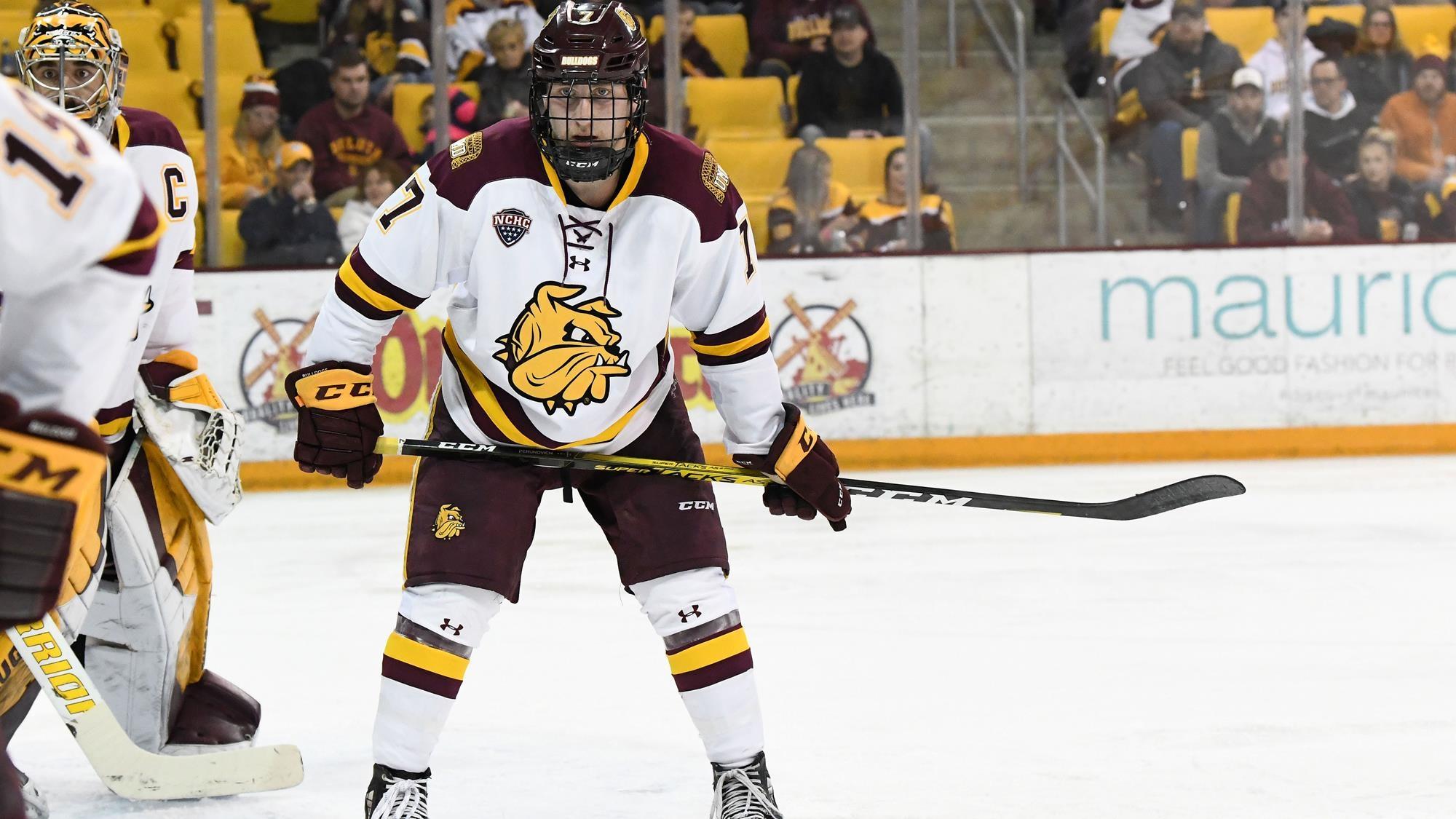 – Scott Perunovich (Minnesota Duluth, 2017-2020): Perunovich is the most decorated former college hockey player on this list. Along with two national championships, the Hibbing, Minnesota native posted 105 points in 115 games on the Bulldogs’ backend. He capped off his college career with the Hobey Baker Award in 2020.