Five games into their NWHL careers Mallory Rushton, Kendall Cornine, and Brooke Baker have made an immediate impact for the Metropolitan Riveter. Since they all went to the same college (RIT), maybe we should have expected them to display this level of chemistry. Or, maybe not.

“It’s interesting because at RIT we didn’t really play together, but now as professionals we are and we’re really connecting out there,” said Rushton. “It’s awesome and I owe my hot start to my linemates.” Rushton has four points, all assists, through five games and has fired 12 shots on goal.

Back in college, there were times that two of three Tigers alumnae found themselves on the same line, but never as a trio. “Everyone always asks if we played together in college and all three of us never played together at once,” said Baker, “but it would be myself and Mal together, or myself and Kendall or Kendall and Mal.”

“I think the three of us having four years of college hockey together, you mesh and become good teammates. We know each other,” the tallest former Tiger continued. “We know our strengths, we know our weaknesses, and that makes it easier on the ice. Coach says we move the puck really well together and those are the reasons why we play together so well.”

Baker has just one assist thus far but has been a thorn in the side of opposing players all over the ice through her first five pro games.

“I feel good out there. It’s nice to be on the ice still playing hockey after our senior year ended, especially doing it with two of my former collegiate teammates,” said Cornine, who was drafted 6th overall by the Riveters in the 2018 NWHL Draft. “They definitely make me feel a lot more comfortable out there. We know each other and know how each other plays. For me, that has definitely made this an easier transition.”

Cornine has five goals, which leads the Rivs, and she’s currently tied for third in the NWHL in that category. All of Rushton’s assists have come on her goals, and she leads the team in helpers. “It’s crazy,” Rushton said of the fact that they have been successful at this level without playing together (as a trio) in college. “The game is faster-paced at this level and we are making great decisions together. It’s been great and I’m glad that we have that chemistry.”

Riveters head coach Ivo Mocek unsurprisingly has no plans to split the trio up. “At even-strength/five-on-five they are going to stay together unless something comes up in a game where we have to try something new. For the power play, I have some ideas for how we can maximize their skill and potential, and both of our power-play units. I’m still thinking about that and it’s a possibility,” said Mocek. 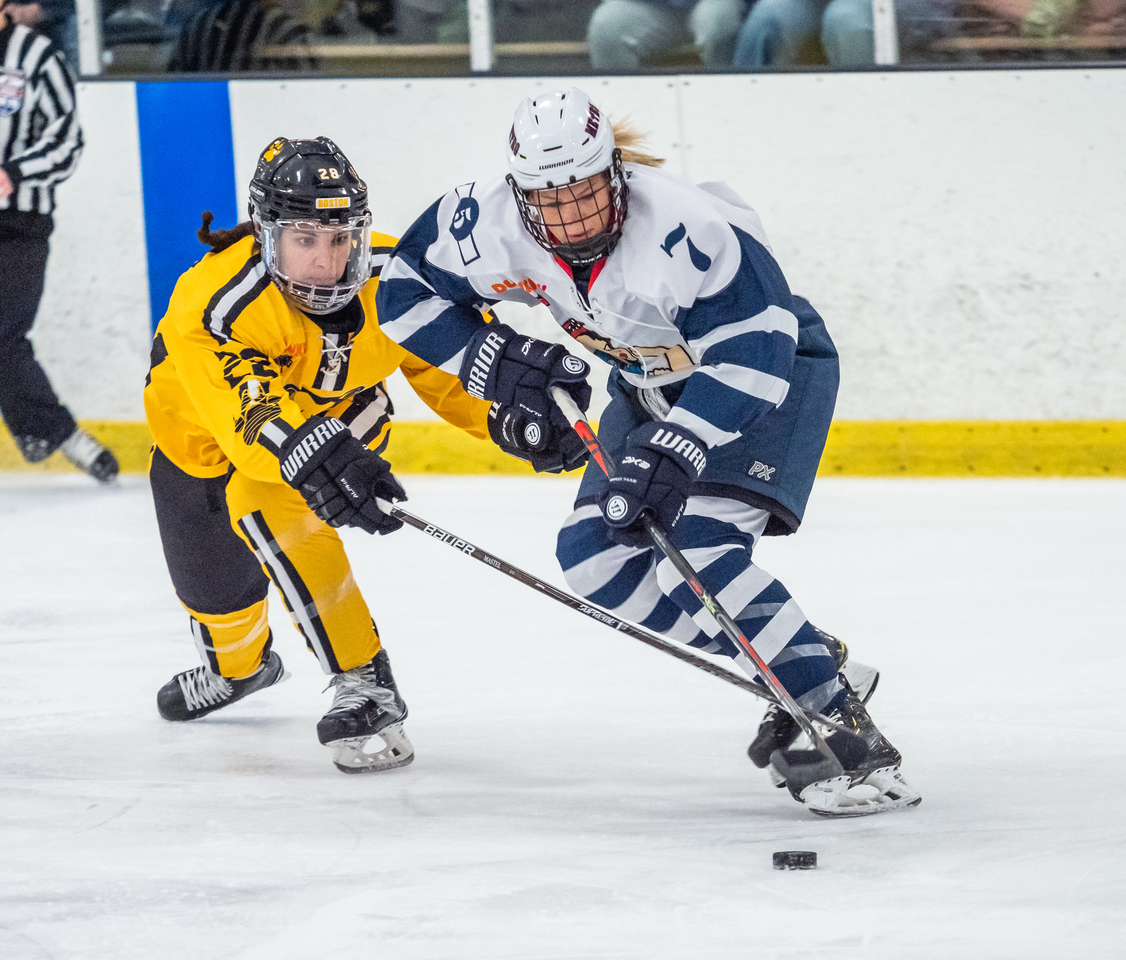 “What I really like about them is that each one of them brings something different to the team,” he added. “I would say Brooke is more of a power forward, gritty, grinding; she’s always working hard. She likes to go to the front of the net, she likes to go to the corners to pass the puck. Kenny (Kendall), I mean she’s scored five goals so far, so she’s got that scoring touch. But I also see her as more of a playmaker.”

“Mallory is a player that can do it all basically and she used to play defense,” Mocek continued. “That’s why in Boston on the second power-play unit I moved her up to the point because she has a really good shot. A very versatile player. They’re all very valuable to this team.”

All three of the former Tigers have enjoyed playing for their new coach and it shows in how they play and practice. “We all have a really good relationship (with him) and I think all of the players respect Ivo,” said Rushton. “He respects us and treats us like adults. It makes a difference when a coach is consistent and has a good relationship with the players. We really appreciate having him here.”

A few days earlier, Cornine had said nearly the same exact thing when asked about her new coach. “He’s been awesome. He knows the game, knows how to talk to us. I’m having a great time here so far,” said the only player of the trio with ties to the area.

Cornine is now living back home in Kinnelon, New Jersey and as a bonus, the first-ever player from RIT selected in an NWHL Draft has two of her best friends living there with her as they continue their hockey careers. “My parents love having the three of us here,” said Cornine, “and it’s nice to be playing so close to home. My family and friends can easily come to the games because when I was playing in college it was five hours away.”

Baker and Rushton were roommates for three years at RIT so there is already that familiarity off the ice as well. Once Cornine signed, Baker wanted to follow suit if she could make it work. “It definitely did make it more enticing. Yeah, I’ll play another year with some of my best friends, that’ll be a blast!”

“I asked my job back home in Ann Arbor if I can work remotely for them and they gave me their full support to pursue this opportunity,” Baker added. “Everything fell into place and worked out perfectly for me. It all made the transition here much easier.”

The trio of former collegiate teammates has been one of the best early season stories on and off the ice for the Riveters. With 19 games still to go the sky is the limit for Baker, Cornine, and Rushton. With 11 home games remaining, fans in New Jersey and New York will have plenty of opportunities to see them throughout the rest of the season, starting on Dec. 7 at ProSkate.

Tickets to Riveters home games are available at riveters.nwhl.zone/tickets. You can watch the Riveters RIT line and the rest of the team in action on twitch.tv/nwhl and twitch.tv/nwhl2.

Phase 2: Getting Frosty at the Rink