The Week That Was – Representing the Red, White & Blue – Ontario Hockey League 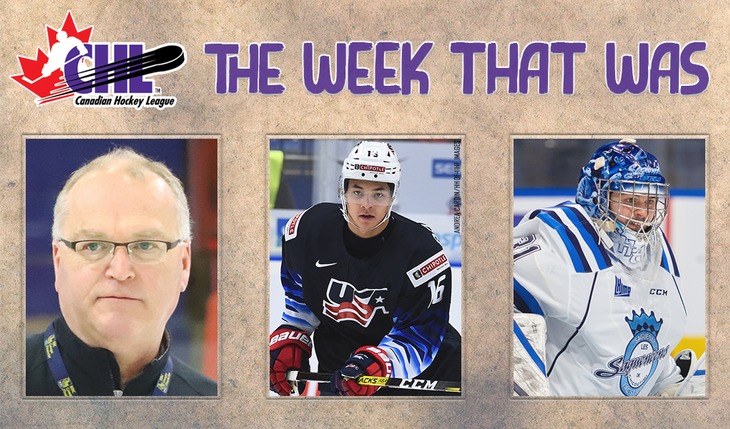 Each week, CHL.ca goes coast to coast to highlight the top stories from around the league.

USA Hockey will have some star-studded auditions at its World Junior camp.

Among the 29 players named to its preliminary roster is Peterborough Petes graduate Nick Robertson who led the circuit last season with an astounding 55 goals in only 46 appearances while also earning recognition as the CHL Sportsman of the Year.

Robertson’s scoring success was a continuation of a strong showing at the 2020 World Juniors where he produced at a point-per-game pace in collecting two goals and three assists through five appearances to finish fourth in team scoring. The product of Northville, Mich., then made his NHL debut in the Stanley Cup Playoffs, securing one goal in four games with the Toronto Maple Leafs.

The award-winning American lineup also counts Everett Silvertips netminder Dustin Wolf, the reigning CHL Goaltender of the Year who concluded 2019-20 with a dominant 34-10-2-0 showing while leading the WHL in all major categories including wins, goals-against average (1.88), save percentage (.935), and shutouts (9). A native of Tustin, Calif., Wolf returns to the national spotlight after playing the understudy at the 2020 rendition in which he made a lone appearance that saw him turn aside 17 shots in a 6-3 win over Germany. Wolf, 19, was selected by the Calgary Flames in the seventh round of the 2019 NHL Draft.

One more step to go.

Rounding out the American trio is Hamilton Bulldogs forward Arthur Kaliyev, a 2019 second-round selection of the Los Angeles Kings who finished fifth in OHL scoring last season with 98 points counting 44 goals and 54 assists through 57 contests. A native of Staten Island, N.Y., Kaliyev was a top performer for the American squad in last year’s tournament as he notched six points in five games. The 19-year-old has spent the past three campaigns with the Bulldogs, highlighted by a J. Ross Robertson Cup win in 2018. Last season also saw Kaliyev became the franchise’s all-time leading scorer – he currently stands at 126 goals and 122 assists for 248 points in 192 career contests.

“We have a talented group and we’ll have some tough decisions to make,” John Vanbiesbrouck, general manager of the 2021 U.S. National Junior Team, said in a statement. “We continue to benefit from a deep player pool and that is a credit to all of the organizations and volunteers developing the next wave of American talent.”

USA Hockey opens its training camp on Dec. 6 in Plymouth, Mich., and will announce its final roster one week later and prior to heading to the protected environment in Edmonton. Tournament play then begins Dec. 25 with the Americans facing off against Russia.

Last year, Robertson, Wolf, and Kaliyev were among 62 CHL players past and present participating at the World Juniors, a list that also included 22 talents who helped Canada to its 18th gold-medal win. Aiming for its first back-to-back first-place finish since 2009, 42 CHL players are currently attending Canada’s National Team Selection Camp in Red Deer, Alta.

Don MacGillivray is getting another shot.

An assistant with the Wheat Kings for the past four seasons, the 55-year-old MacGillivray last served as a WHL head coach in an interim capacity with the Prince Albert Raiders during the 1997-98 campaign, while his overall coaching resume is highlighted by four-time Coach of the Year recognition while manning the bench in the MJHL.

“I was extremely disappointed when I didn’t get the (head coach) opportunity a year ago,” MacGillivray told Perry Bergson of The Brandon Sun. “That was a tough pill to swallow but I’m so grateful that I had that opportunity to work with Dave last year. I think I’m a better coach today than I was a year-and-a-half ago.

Lowry, who spent one season with the Wheat Kings, guided the club to a 35-22-4-2 record and 76 points, good for third place in the WHL’s East Division. Previously at the helm of the Victoria Royals for five years in addition to one season with the Calgary Hitmen, Lowry joins the Jets as an assistant where he will have the chance to work alongside his son and former Four Broncos Trophy recipient Adam Lowry.

“That was something that we had to have Adam’s blessing on it and I totally understand that if he wasn’t comfortable with me coming in and being a part of the staff, this is something I wouldn’t have continued to pursue,” said the elder Lowry per Sam Thompson and Kelly Moore of Global News. “I realize and recognize he’s an established player in the NHL and it should be an easy transition. I look at it, we’re both professionals. I’m a coach, he’s a player. That’s the way this works.”

Back in Brandon, MacGillivray’s first game comes early in the new year with the WHL set to Return to Play on Jan. 8, where the Wheat Kings led by NHL drafted prospects including Ridly Greig (Ottawa Senators) and Braden Schneider (New York Rangers) will look to build upon last year’s successful season.

Alexis Shank is in rarefied air.

Turning aside all 24 shots versus the Quebec Remparts on Monday, the Chicoutimi Sagueneens overager became just the third netminder in franchise history to record double-digit career shutouts.

The achievement ties Shank with Felix Potvin, who suited up for three seasons and 181 career contests with the Sagueneens from 1988-91, and three back of top spot currently held by Christopher Gibson, who notched 13 shutouts over 155 games from 2009-13.

Shank, 20, also stands third all-time in franchise wins with 83, just nine victories shy of surpassing Potvin for the overall lead, an achievement that will surely come during the 2020-21 campaign. The Sagueneens currently stand 5-2-3-1 on the season, with all five victories coming with Shank between the pipes.

Meanwhile, the accolades have only continued for Shank who was also among 19 QMJHL players awarded by the Sport-Études Foundation scholarship program in recognition of academic excellence among student-athletes. Also among the recipients from the Sagueneens included graduated forwards Felix Bibeau and Rafael Harvey-Pinard.

Kayla Meneghin and Brooke Wolejko to Compete in...

Beauts Off To Lake Placid–For Their “Miracle” Season